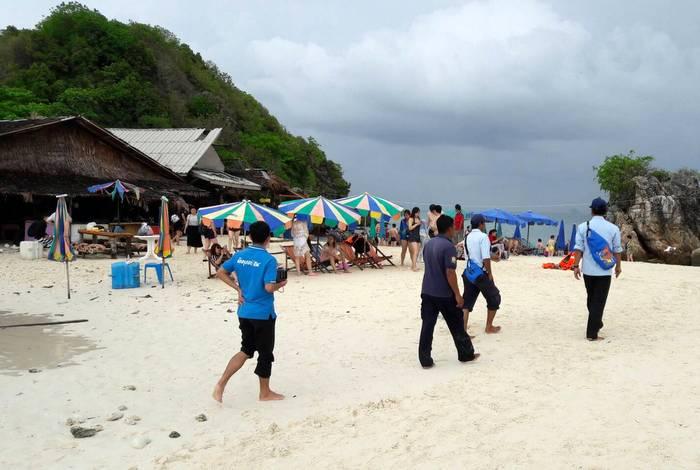 PHUKET: A Chinese tourist was arrested yesterday for feeding fish at Koh Kai.

The arrest of Hongzhi Zhou, 45, was the first time a tourist has been detained after emergency powers were granted to law enforcement officials by the Department of Marine and Coastal Resources (DMCR) Region 6 on May 24 to protect marine life.

The measures, referred to as Article 17, grant additional powers to law enforcement officials, including the ability to arrest anyone thought to be interfering with marine life.

Mr Zhou was released on a 100,000 baht bail, which was paid by his tour guide. Mr Zhou now has to remain in the country until his case is processed by a court.

“We caught Mr Zhou feeding fish on May 25 at about 3:30pm on Koh Kai Bok,” said DMCR spokesperson Suchat Rattanaruengsri.

Mr Suchat said the arrest should serve as a warning of new law enforcement procedures aimed at tackling the environmental degradation of marine life around Koh Kai, Kai Nok and Kai Noi islands, all of which fall under the purview of the DMCR.

“I believe that if we continue this level of enforcement, tourists and tour operators will be deterred from interfering with marine life,” Mr Suchat said.

Find out more about the new powers granted to police and marine park officials to protect marine life with the signing in of Article 17 in the upcoming May 28 – June 3 edition of the Phuket Gazette.

Amateurs tee off at first Open