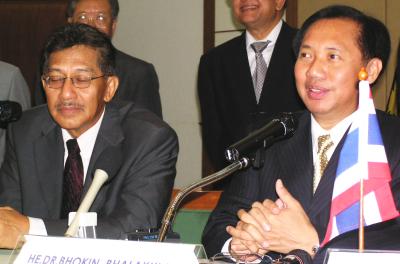 PHUKET: Thailand and Malaysia today agreed in principal to do away with the current system of passes that allow nationals from the two countries to cross the border without a visa.

Under the agreement, future cross-border travel will require no more than the presentation of “smart cards”, systems for which are now being developed by both nations.

The announcement followed a meeting at the Cape Panwa Hotel between Thai Interior Minister Bhokin Bhalakula and his Malaysian counterpart, Minister of Home Affairs Dato’ Azmi Khalid. A total of about 45 officials from both countries attended the talks.

After the meeting, K. Bhokin told a press conference, “Both sides agreed that linking our smart card systems would make travel more convenient.”

K. Bhokin said that the Malaysians had proposed doing away with dual Thai-Malaysian citizenship and making those currently holding two passports decide on a single nationality.

The dual nationality has taken on greater significance since the increase in violence in the predominantly-Muslim deep south of Thailand in the past year.

Some have charged that dual citizenship allows insurgents to stage violent attacks in Thailand before fleeing across the border into Malaysia to escape arrest.

Dato’ Azmi Khalid said he was impressed with Thailand’s efforts to institute the smart card system.

“If we can access each other’s information databases, both countries will benefit. We are very happy to see that the development of a smart card system in Thailand is moving very fast.

“I couldn’t believe it when I heard that a smart card system for 60 million people would be finished by 2006. We have [only] 25 million people in our country [but] we are [expecting] to finish it by the end of 2005. So Thailand is moving very fast.”

Siwa Sangmanee, Deputy Permanent Secretary of the Thai Interior Ministry, said a committee would be set up at a later date to work out the specific regulatory requirements of the new system.

After the meeting, the Malaysian delegates, who arrived in Phuket yesterday, were taken on an island cruise from Cape Panwa Pier. They are expected to return to Kuala Lumpur this evening.

Three murdered in one night