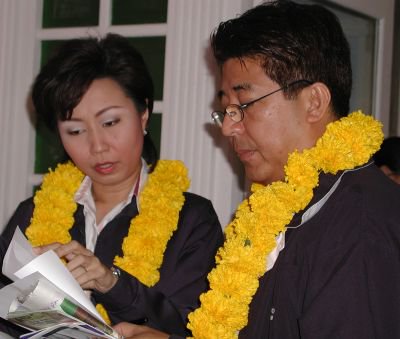 PHUKET CITY: Thai Rak Thai (TRT) today confirmed that the party’s candidates for the general election, scheduled to take place by February 13 next year, will be Dr Sriyada Palimapan and Wisut Santikul.

Both of Phuket’s current MPs are Democrats.

Dr Sriyada told a press conference today at the Town Inn Hotel that TRT had wanted to work for Phuket for the past four years, and that the island had benefited from initiatives from the national party.

These included the the Andaman Tourist Rescue Development Project; Chalong harbour development; infrastructure projects to improve road, traffic, and water and electricity supplies; as well as educational projects and anti-terrorism and security measures.

The party’s proposals for the future include the creation of a duty-free zone for tourists, the development of health tourism and support for a software park, the candidates added.

K. Wisut said he would like to use what he had learned in becoming a successful business person to benefit the island and its communities.

He said, “We don’t want Phuket to miss out on any opportunity. We need to use government funding to work for Phuket people. We’re not dreaming; we have a strategy to make it happen.”