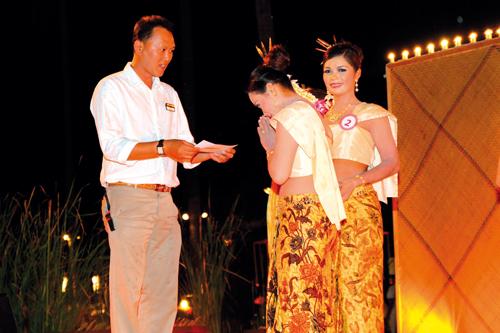 Kyaw Kyaw Khine is a piece of living Phuket history. At 47 years old, he is the first Burmese national to become a hotel manager in Phuket’s critical tourism industry, at one of the best known hotels on the island: the On On Hotel on Phang Nga Road in Phuket Town. Here he tells the story of his challenging road to success.

PHUKET: The opportunity for Kyaw Kyaw Khine, better known as “Joe”, to shine with a long career in Phuket’s tourism industry was made plain years ago, but the road ahead was set to be steep – and both he and the owner of The Treasury Village Group knew it.

“I want you to become my hotel manager. However, I am worried that you will have to face challenges to gain people’s acceptance. Are you ready for that?” the owner asked.

Joe has answered that question amply: today he is the Associate Property Operation Director for The Treasury Village Group, making him the manager of the renowned On On Hotel in Phuket Town (now called The Memory at On On – click here for story) and the Nasara House resort at Panwa Beach.

The long path to this crowning achievement rose out of the ashes of the “8888 Nationwide Popular Pro-Democracy Protests”, also known as the People Power Uprising, in Rangoon (now called Yangon) on August 8, 1988.

Joe was a chemistry major at the University of Rangoon at the time.

“After the uprising, the government privatized some industries, including the hospitality trade. They opened 20 hotels around the country and recruited 10 staff for each hotel,” Joe explained.

“I remember that day very clearly. More than 10,000 people applied for the 200 positions available. I was lucky to get a job as a hotel receptionist.”

Joe attributed his early success to his proficiency in English.

“My English was probably what made me stand out from the other applicants,” he said.

After two months of training – funded by the Burmese government, the United Nations Development Programme (UNDP) and the International Labour Organization (ILO) – Joe received a certificate from the Kandawgyi Hotel and Training Center Joe and spent the next six years working as a hotel receptionist and a part-time hotel business teacher.

During that time, Joe landed a job at The Strand Hotel. One of the most prestigious hotels in Myanmar, The Strand today charges up to US$1,500 per night. Despite his prize position, Joe took computer classes in order to be more competitive in the job market.

“I had to work for the government for at least five years, and in 1995 I received a government certificate allowing me to seek employment opportunities elsewhere. I could work on a ship or in an embassy. Working in a foreign country is everyone’s dream in Myanmar,” Joe explained.

“I took up a friend’s invitation to move to Thailand. I started working as a hotel receptionist on Phi Phi Island with a monthly salary of 4,000 baht,” he recalled.

In his 15 years of dedicated hard work since then, Joe encountered many challenges, among them culture shock.

“What I found most challenging was the difference between Thai and Burmese cultures. For example, Burmese like to argue. It is normal for us to argue, which sometimes may lead to a fight. Thais are more quiet and keep their feelings to themselves,” Joe explained.

When the tsunami hit the Andaman coast in 2004, Joe realized how caring his employers were.

“As the fallout from the tsunami took its toll on tourism, many hotels cut staffing to half, but my owners kept everyone – they didn’t fire a single person.”

He spoke with gratitude of the couple – Veerapan Trisuvan, who passed away in 2011, and his wife Nasara Trisuvan, the current owner of The Treasury Village Group.

“I initially came here on a tourist visa and worked illegally. It was very complicated for a Burmese person to get a work permit in this country, more difficult than other foreigners,” he said.

“I consider myself very lucky to meet such wonderful owners. They helped me from the start with the legal process of obtaining a Thai work permit… They are family,” he added.

The post-tsunami rebuilding offered a golden chance for Joe to shine in his role as a manager. “As an Executive Assistant Manager at the time, I ordered everyone to help renovate the hotel. One of my workers was afraid to climb up and paint the ceiling, so I did it myself.

“Like my employer said earlier, it was not easy to gain acceptance at first. The key to success is to prove your abilities – not by words, but by actions. I showed them what I was capable of and they respected me for that,” Joe said calmly.

A key ingredient to success is patience, said Joe.

“There is a Buddhist saying, ‘Patience is our highest moral practice’. I would like to suggest this to all Burmese people working in Thailand. I started with nothing more than a salary of 4,000 baht a month and a determination for a better life – and I worked hard for it.

“Even though I was promoted to Front Desk Manager after only a few years of work, I still only got 6,000 baht per month. The market salary for my position was 20,000 baht. It took six to seven years before I finally got the market rate.

“I could not have overcome this without being patient,” he said.

All in the mind

Joe pointed out that many Burmese he had met complained about being looked down on.

“No one here is looking down on you, it all happens in your mind. When Thais go work in a western country, they feel looked down on too, but I don’t think they are.

“All you have to do is focus on the task at hand. Don’t imagine things that will hurt you. Just be the best person you can possibly be at whatever you do,” he urged.

With the Asean Economic Community (AEC) trade regulations to come into effect in 2015, Joe believes that workers from Myanmar will go home if the right employment opportunities arise.

“Thailand may face a labor shortage. The Thai government should come up with solutions to counter this. I believe that making it easier for people to travel back and forth across the border for work is a good solution to this problem,” he said.

Thailand’s long history as a land of bounty and opportunity likely plays a part in the Thai national psyche, Joe suggested.

“Thais are born with so many opportunities open to them, while Burmese have to struggle to gain anything. This may be why Thais are sometimes not serious enough. I would suggest Thais be more concerned about their lives and their work in order to be competitive with a wider source market of labor in the Asean community,” he said.

As for Burmese working illegally in Phuket and Thailand, Joe suggested that better education is what his country needs.

“The Burmese government should provide its people information about working abroad. People should be informed and assisted throughout the process of obtaining visas and work permits. No one wants to be illegal. Paying a broker 8,000 baht to come and work illegally is not appropriate,” he said.

“Also, it would be a good idea for Phuket to have a Myanmar Consulate or an Honorary Consul to assist Burmese workers. Right now, Burmese have to travel to Bangkok to seek help.

“It is time to change that,” he said.