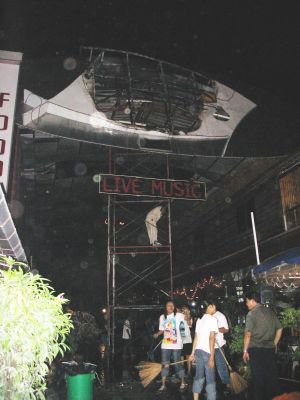 PATONG: The illuminated sign overhanging the entrance to Soi Moodies entertainment plaza, on Rat-U-Thit 200 Pi Rd, burst into flames on Saturday night. The sign caught fire at about 10 pm. Phuket Vice-Governor Pongpow Ketthong, who was dining directly underneath, was one of the first to notice the flames and called the fire department. Restaurant Manager Banai Ngamsri told the Gazette, “They arrived about 10 minutes later, and put the fire out in about five minutes. They were very good.” K. Banai estimated the damage at about 50,000 baht, plus 20,000 baht loss of earnings on the night. No one was injured in the fire. “The fire started from old wiring in the sign,” he said. “We will check all wiring to make sure that this does not happen again.”