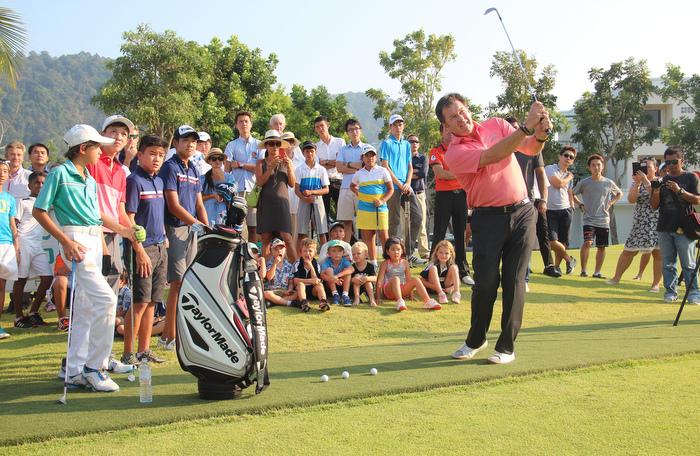 Dozens of members of the BISP community attended the ceremony at the center, located adjacent to the top football pitch behind BISP’s Sport Hall.

“[I’m] delighted to be here, hearing about your impressive school, and all the wonderful opportunities you have in so many different sports. The most important part of sport is being able to visualize your success… and commitment,” said Sir Faldo, during his speech to the audience of students, parents and staff.

Sir Faldo then went on to christen the BISP Golf Center by hitting several chip shots, followed by a four hole shoot-out with BISP Golf Academy player Mark Luangnitikul, which – although Mark took the first hole – Sir Faldo won by a final margin of 3 to 1.

Sir Faldo is an advocate for junior golf development, having created his Faldo Series in 1996 to give opportunities to youth through golf and to help identify and nurture the next generation of champions. The Faldo Series now stretches throughout 30 countries and benefits more than 7,000 young golfers each year.

Open to golfers ages 12-21 years old, the winners of each age group will qualify for the Faldo Series Asia Grand Final, hosted by Sir Faldo, which will be held in Laguna Golf Lang Co, Central Vietnam in March 2017.