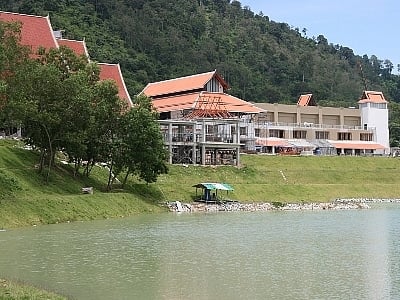 PHUKET: The new Siam Niramit Theater off the bypass road in Phuket is almost complete and should be ready to open in December, its operators say.

The 50-rai complex is located behind the Hino dealership off the southbound bypass road in Rassada. When completed, it will comprise a 1,750-seat theater with a stage for live performances; a floating market on an old tin mining pond, and a Thai cultural village.

“We have seen Phuket as a potential destination for our stage performance featuring Thailand’s arts and cultural heritage. There are many charter flights landing in Phuket every day. Foreign travelers stay longer in Phuket, five to seven days on average, compared to only one or two days in Bangkok,” Wallapa said.

Ratchada Niramit already operates the Siam Niramit Theater in Bangkok. It was developed and operated by the Kittiparaporn family, which has operated the Magic Land and Dream World amusement parks in the capital for almost 20 years.

“We have operated Siam Niramit in Bangkok for about six years. The 2,000-seat theater served only 300 to 400 viewers per show over the past three years due to local economic difficulties and the political unrest, which affected the number of foreign tourists coming to Bangkok. Foreigners comprise 90 per cent of our clients,” said Mr Wallapa.

With the more stable political situation and the improvements in the overall economy, audience numbers at Siam Niramit Theater started to increase in October and November of last year and now stand at between 800 and 1,000 per show. The theater puts on one show daily.

Costing 1.5bn baht, the Siam Niramit Theater in Bangkok is expected to reach the break-even point in the next three to four years.

Company representatives say the new theater in Phuket will offer performances similar in style to the one in Bangkok, but on a technically more advanced and grander scale. The facility is expected to compete in Phuket with long-established tourist attractions, especially Phuket FantaSea in Kamala.

Also recently opened in Phuket is the Aphrodite Cabaret, sited opposite the main Tesco-Lotus branch on the bypass road. Billed as the “world’s largest” transgender cabaret show, the facility will be in direct competition with the long-established Simon Cabaret in Patong.