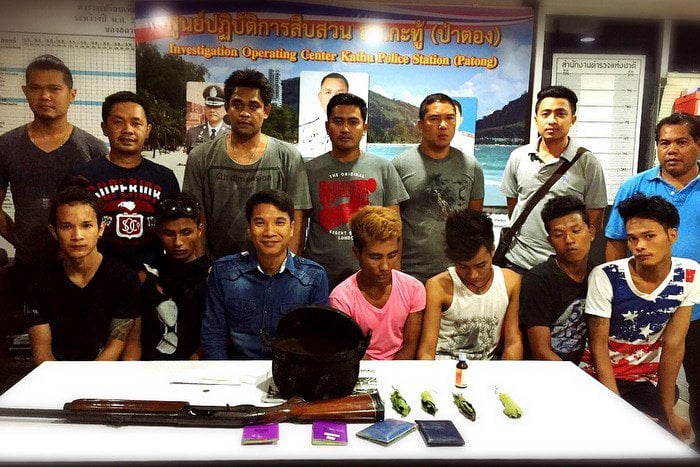 PHUKET: Patong Police arrested seven suspects in possession of an illegal weapon and drugs yesterday as part of a series of raids to be carried out through the Songkran holiday.

Police first arrested Songchai Warisayakorn, 37, at his rental room in Patong, after being tipped off by nearby locals.

“We found a Remington shotgun and a 9mm Glock pistol, as well as 36 rounds of 9mm bullets in Mr Songchai’s room,” said Lt Col Suttichai Thianpho of the Patong Police.

“He had the correct documents and licence for the pistol, but not for the shotgun. We charged him for illegal possession of a weapon.”

On the same night, police in two separate raids arrested six Myanmar nationals at a workers’ camp near Simon Cabaret in Patong, in possession of kratom as well as tea made out of the leaves.

“They were charged for producing kratom tea and possession of a Category 5 drug,” Col Suttichai said.

“They were also charged with possession of a Category 5 drug,” said Col Suttichai. “All seven suspects were taken to Patong Police Station for further questioning.”

The raids will continue every night through the Songkran holiday, with police paying especially close attention during the Songkran ‘Seven Days of Danger’ from April 9 to 15, Col Suttichai explained.

“The pre-Songkran period is considered to be very dangers. Criminals often use the holiday time to commit crimes, which is why these raids are essential,” he said.

“The raids will be focused in Patong and on nightlight venues, areas where teenagers often hang out and migrant worker camps.”