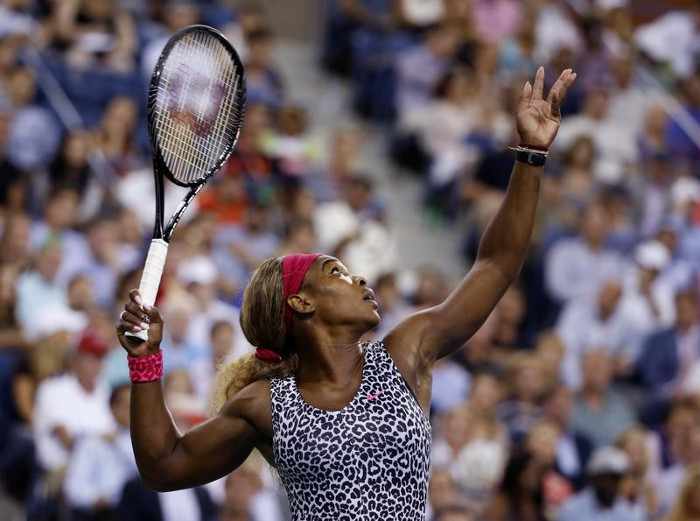 PHUKET: Two-times defending champion Serena Williams, in her black and white leopard dress, started quietly before roaring past 11th seed Flavia Pennetta 6-3 6-2 to reach the semi-finals of the U.S. Open on Wednesday.

The world number one lost her first two service games to Pennetta to fall behind 3-0 before snapping to attention and rattling off the next six games to claim the first set.

“She was playing really well and she was playing very aggressive,” said Williams. “So I had to just step up my level of game as well.”

Determined to make up for a disappointing grand slam season in which she failed to reach the quarter-finals in any of the three previous majors, Williams broke her fellow 32-year-old in the fifth and seventh games to advance in 63 minutes.

The top seed will meet Russian 17th seed Ekaterina Makarova, who reached her first grand slam semi-final with a 6-4 6-2 victory over 16th seed Victoria Azarenka, runner-up to Williams in the last two Opens.

Pennetta was disappointed to have lost, but not disappointed with the quality of her tennis against the 17-times grand slam singles winner.

“She was really good today. I think we play really good tennis tonight. I mean, really strong tennis in everything,” said the Italian. “Today, I push so much and she come in with the best tennis, I think.”

The match was played at a high level, but once Williams got rolling she was hard to stop, blasting 17 winners in the second set for 31 in total.

Pennetta, who served six aces, one less than Williams, committed a meagre 16 errors but could not slow down the five-times champion, who became the first player aged 32 or older to reach the U.S. semi-finals since Martina Navratilova in 1991.

A spate of upsets on the women’s side have left Williams as the only one of the top nine seeds still playing, but the top seed said Makarova, China’s unseeded Peng Shuai and 10th seed Caroline Wozniacki were well deserving semi-finalists.

“Honestly I’ve had a tough year in the majors. You can never underestimate anyone,” she said. “Congratulations to everyone who made it to the semis.

“Especially for me this year, you never know what can happen. I take everything very seriously as it comes.”

Another Open title would push Williams’s career total to 18, tying her for fourth place on the all-time grand slam list with Chris Evert and Navratilova.

Williams was asked what the number 18 means to her.

“It means a lot. It means legal to do some things,” she said, drawing some chuckles from reporters. “It also means legendary. Legal and legendary.

Men hunted down, hacked to death in Phuket