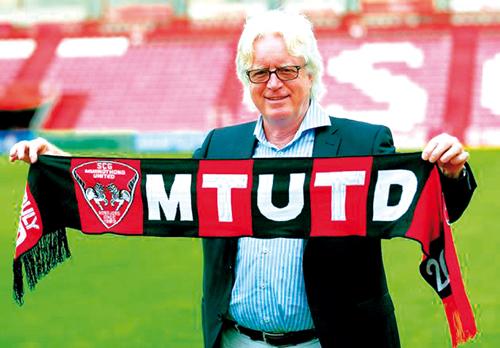 Schaefer’s move to Muang Thong represents a solution to the headache suffered by the Thai Football Association as it sought to end the German’s contract following Thailand’s poor run of results.

Kiatisak “Zico” Senamuang has replaced Schaefer on a caretaker basis, with a friendly against China on June 15 set to be the former national striker’s first game in charge of the Thailand national team.

The experienced Schaefer also seems a good fit for Muang Thong, after the three-time Thai Premier League champions were overtaken at the top of the standings last weekend by bitter rivals Buriram United following a 1-1 draw at home to Osotspa.

Schaefer left a message on his Facebook page thanking fans for the support he has received during his time as manager of Thailand.

“The FA of Thailand and me canceled our contract by mutual agreement. I am very sad about this development. I had a fantastic time with the kindest, good-hearted players. I wish them all the best for the future. I will give you more information soon. Thank you for your support.” he wrote.

Citing injury, Muang Thong United striker Teerasil Dangda has pulled out of Thailand’s squad for this Saturday’s friendly against China.

The 25-year-old Teerasil was one of three players, along with his Muang Thong team-mate Panupong Wongsa and Chonburi FC defender Chonlatit Jantakam, who have had to withdraw from the team for the upcoming match in Nanjing.

The absence of the experienced trio presents a headache for caretaker coach Kiatisak in his first game in charge of the Thai team.

“It’s clearly a blow. The three players are key members of the squad. But it would be an opportunity for younger players to prove their worth. This squad is largely made up of young talented players who are likely to make the SEA Games squad for the tournament in Burma at the end of the year.

“Should any one of them perform well, they certainly have a chance to get a call-up for the senior side in the future. I believe we could give them [China] a hard time in the match and it would be a good test for our youngsters, psychologically.” he said.

Kiatisak, however, said that he would leave his job after the China fixture to continue his work as the coach of the under-23 SEA Games squad, as he felt he was not ready yet to coach the senior team.

“I am giving my word that I will leave after the match against China. If you ask whether I would take charge of the team in the future, I cannot give a definite answer right now. I feel, at this point, that I haven’t had enough experience to coach the senior team.

“For me, it does not matter whether the Thai FA decides to hire a local or a foreigner as our next coach. Each decision has its pros and cons. A foreign coach might be good but he may not win over the players,” said Kiatisak.