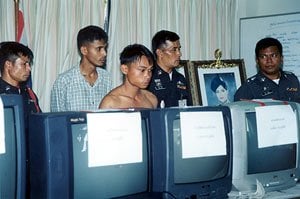 CHERNG TALAY: Police yesterday arrested Laotian construction worker Kae Kampukao, 19, for his part in a robbery in which a woman was threatened with a hammer, and are hunting his Thai partner-in-crime. Pol Maj Gen Kongpol Suwannaraks, Commander of Phuket Provincial Police, said this afternoon that at about 4:30 pm on Tuesday, local resident Saowarak Inyam, 28, reported to police that two men had threatened her with a hammer and robbed her of a bracelet, a necklace and a gold ring. Soon after, police on patrol spotted two men matching the description of the robbers riding a Honda motorbike from Cherng Talay toward the Heroine’s Monument, and followed them. The two men stopped at the junction with Soi Patchanee, where they dumped the motorbike by the side of the road and ran off into a nearby mangrove forest. Inquiries led police to a construction camp beside Wat Naka, where Kae was arrested. Gen Kongpol said that Kae had confessed to the robbery and said that his companion was a Thai from Nakhon Phanom, whom he knew only as “Hong”. Kae also confessed to 16 similar crimes committed in Phuket in the past nine months. During questioning, Kae admitted that the pair had followed K. Saowarak to her house on a motorbike. Outside the house, Hong jumped off the bike and grabbed K. Saowarak’s mother and, threatening her with a hammer, pushed her into the house. They then robbed K. Saowarak by threatening her with the hammer. Gen Kongpol said that Kae had admitted that he and Hong stole ID cards to use them to rent motorbikes, and that the pair usually sold the stolen property to shrimp farm workers and spent the money on drinking in karaoke bars. During follow-up inquiries, police recovered a number of items, including four TV sets and K. Saowarak’s jewelry, which were held as evidence. Kae is being held at Cherng Talay Police Station while police continue their search for Hong.