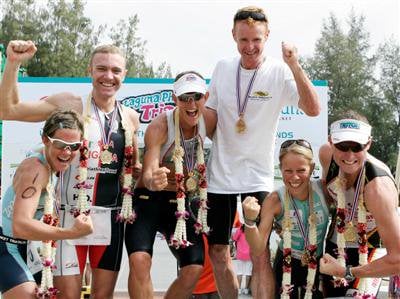 The announcement of the season-ending event comes after an agreement to stage the race was signed between Laguna Hotels and Resorts Plc and the World Triathlon Corporation (WTC).

The 70.3 race will incorporate Laguna Phuket Triathlon’s trademark swim course comprising two-bodies of water, a challenging and spectacular bike course with hilly sections and winding rural roads through rubber plantations and villages, before culminating with a two-loop flat run that will include roads within Laguna Phuket.

Athletes can qualify to compete at some 35 Ironman 70.3 races held around the world.

The championship race will offer a US$60,000 professional prize purse as well 50 qualifying places for the 2011 Foster Grant Ironman World Championship 70.3 in Clearwater, Florida.

The event is expected to reach a worldwide audience in excess of 380 million.

Phuket was selected due to its proven track record for hosting major sporting events, such as the Laguna Phuket Triathlon, Phuket International Marathon and the FIVB Women’s Beach Volleyball World Tour.

“The decision to host the Series Championship event at Laguna Phuket was an easy one,” he said.

“The resort serves as a destination with broad appeal to athletes in all of our markets, including Australia, Singapore, Japan, the US and Europe. It is a proven triathlon venue.”

“The management of Laguna Phuket and the government of Phuket Province are truly honored, extremely excited and proud that Phuket has been selected to host the Ironman 70.3 Asia-Pacific Championship,” he said.

“We feel that the 16 years of hard work and dedication that has gone into organizing the Laguna Phuket Triathlon has been rewarded by the international triathlon community, who recognize that we have the know-how and resources to ensure a very successful Asia-Pacific 70.3 Championship event in 2010 and beyond.”

Laguna Phuket stages its own annual triathlon event held on the first weekend of December.

The event is known as the ‘Race of Champions’ due to the number of world-class triathletes it attracts.