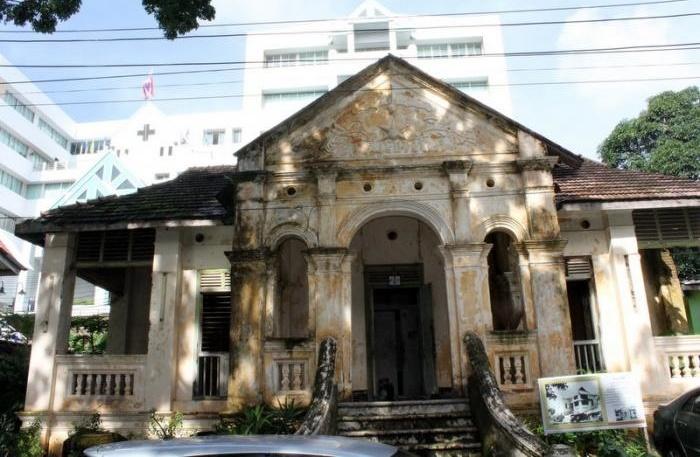 PHUKET: Vachira Hospital administrators have reached an agreement with concerned community members and employees over the proposed demolition of historic 100-year-old buildings and their surrounding mahogany trees.

The plans to demolish the existing structures in order to make way for a new 298-bed hospital wing were halted after a public outcry from doctors and community members reached a fever pitch on August 25 (story here).

Vachira Hospital Deputy Director Somboon Wangtaetham announced today that the buildings will not be demolished, following a meeting with members of the national Fine Arts Department.

“In the meeting, we reached the conclusion not to demolish the buildings,” Dr Somboon said. “Moreover, we will have the site inspected by an engineer and an architect.”

Dr Somboon said the old buildings – named as the Ranong, Boontham and Sripatcharintranusorn buildings – will be transformed into a museum, displaying historical medical devices, such as Thailand’s first X-Ray machine from Singapore, and will include blood donation facilities.

Dr Somboon said the new wing would instead be placed elsewhere on Vachira’s grounds.

“We are here in Phuket in order to find out the truth and to check on the buildings after hearing the public outcry over their proposed demolition,” Mr Kajorn said.

He noted that the Boonphat and Ranong buildings have endured heavy damage, and that the Fine Arts Department would compare the buildings’ current state with an old photograph in order to estimate their renovation budget.

“A request has been filed to register the buildings with Fine Arts Department,” he said. “For the Sripatcharintranusorn building, the final renovation designs have already been completed and the 3.6 million baht budget is awaiting ministry approval.”

Police blame Russian for theft of B3mn in ATM hacks