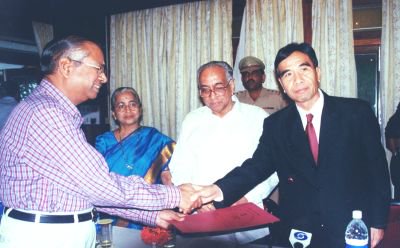 PORT BLAIR: Talks between a visiting Thai delegation and their counterparts in the Andaman & Nicobar Islands ended with no decisions but on a distinctly positive note. The 63-strong Thai delegation, including local and central government representatives, private sector figures and naval personnel, and led by Phuket Governor Udomsak Usawarangkura, visited the islands’ capital, Port Blair, from Friday to Sunday. Gov Udomsak told the Gazette that all issues discussed would be on tabled again during higher-level talks at the rescheduled Bangladesh, India, Myanmar, Sri Lanka and Thailand Economic Cooperation (Bimstec) talks to be held in Bangkok in July. But although the talks reached no absolute conclusion, an accord between the Port Blair and Phuket administrations was signed on June 12. Gov Udomsak and his opposite number from the islands’ administration, S Hemachandran, promised to work more closely in areas of common interest, such as tourism, fisheries, trade and investment, natural resources and environmental protection. Phuket’s governor offered an upbeat appraisal of the three-day meeting: “Our local-level talks on issues previously discussed by our two countries’ prime ministers were productive,” he said. Gov Udomsak said that Thailand and India, which owns the islands, would share skills and knowledge on information and communications technology, and that Indian experts would be invited to work in Phuket under the aegis of the Software Industry Promotion Agency (Sipa). He added that scholarships may be offered to students from Port Blair to study tourism management at the Prince of Songkhla University’s Phuket Campus. Transport links between the islands were also discussed. Following a free trade agreement signed last October by Thailand and India, the number of chartered or scheduled flights between the Andamans and Phuket is due to increase. But Busara Dusadeeisriyawong, Sales and Marketing Manager for Phuket Air, admitted, “It’s just not cost-effective to fly there yet because there is virtually no market [at the moment]. It doesn’t follow that more frequent flights will immediately result in increased numbers of passengers. She cited landing fees at Port Blair as a major obstacle. “Landing fees at Port Blair are very high, roughly 80,000 baht, compared with around 20,000 baht in Phuket. “The aircraft we [Phuket Air] would use for the Phuket-Port Blair route carry 64 passengers. Even on a full flight we would still be paying over 1,000 baht per passenger in landing fees,” she concluded. Remaining optimistic, Gov Udomsak said that he hoped to see the Andaman and Nicobar Islands becoming established as part of the Phuket sailing, diving and luxury cruising itinerary.