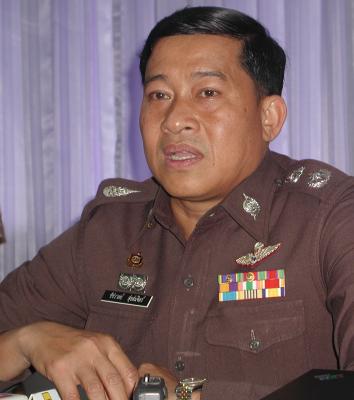 PHUKET: Police in Phuket have been urged to take special care of Australian tourists in the wake of last week’s car bomb in Jakarta, Indonesia, which killed at least 10 people and did massive damage to the Australian embassy.

The Deputy Commissioner of the National Central Investigation Bureau, Pol Maj Gen Chachavan Suksomjit, also called on the tourist police in Phuket to be alert to any signs of potential terrorist activity, and to encourage hotels and guesthouses to report suspicious people to the police.

However, Gen Chachavan said, because terrorists pursue psychological warfare, their targets are more likely to be state buildings than people. This is why, he said, the police were especially active around embassy buildings in Bangkok.

And he stressed that police have never found any evidence that anyone is planning to harm tourists in Phuket.

Gen Chachavan was in Phuket on Saturday to present scholarships to the children of local police officers.

He talked about police activity to protect tourists from thieves in southern Thailand, as well as police action against the illegal occupation of state land, and a crackdown on smuggled goods – from cow parts imported illegally via Malaysia to pangolins smuggled from Malaysia to Thailand – and counterfeiting.

He said, “We have two areas locally where we have problems with places selling goods that violate copryright laws; one is Patong and the other is Chaweng on Koh Samui. The police in these areas are working to solve these problems.”

Gen Chachavan also talked about how the local police are enforcing the national government’s policy to suppress southern Thailand’s “Mr Bigs”. At one time, three people were under surveillance, he said, but that number has now risen to 20.

Activities in which the 20 are allegedly involved range from illegal occupation of state land to running underground lotteries.