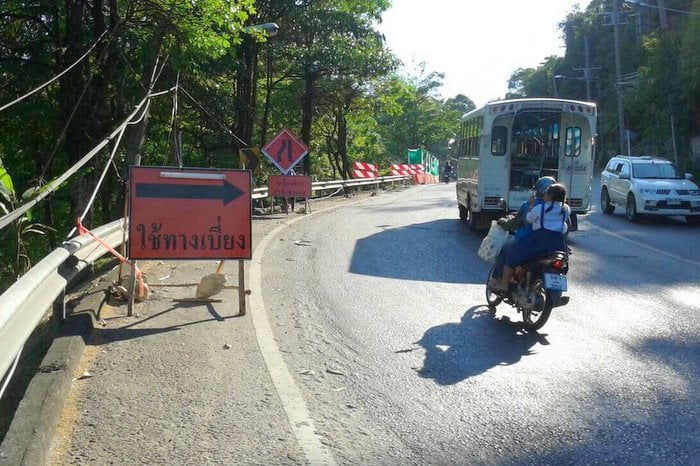 PHUKET: The Phuket Highways Office will close a 200-meter section of the outside westbound lane over the top of Patong Hill in order to repave the road and complete safety improvements at the notorious site.

The lane will be closed from tomorrow through Sunday, confirmed Samak Luedwonghad, director of the Phuket Highways Office.

“Warning signs have been installed to inform motorists that the lane ahead is closed,” he told the Phuket Gazette today.

“It will not affect a large area, only 200 meters of the road. Cars and motorbikes will still be able to pass safely, though I suggest that tour buses access Patong via Kamala.”

The lane closure will allow workers to complete the retaining wall that has been installed to prevent landslides during the annual rainy season, which is expected to arrive within the coming few weeks.

“We will also repair the cracked road surface,” Mr Samak said. “This will cause some traffic delays, but it’s for safety. The road will reopen to normal traffic in a few days.”

The entire project was funded by a budget of 25 million baht, he added.

Heavy rains during the northeast monsoon over Phuket in 2011 caused a landslide that brought down power poles at the section of road that is under repair this week (story here).

One year later, another landslide brought down power poles on the west side of the top of the hill, and left motorists to navigate a gaping hole half a lane wide that risked vehicles plunging down the steep slope to the bottom of the hill (story here).