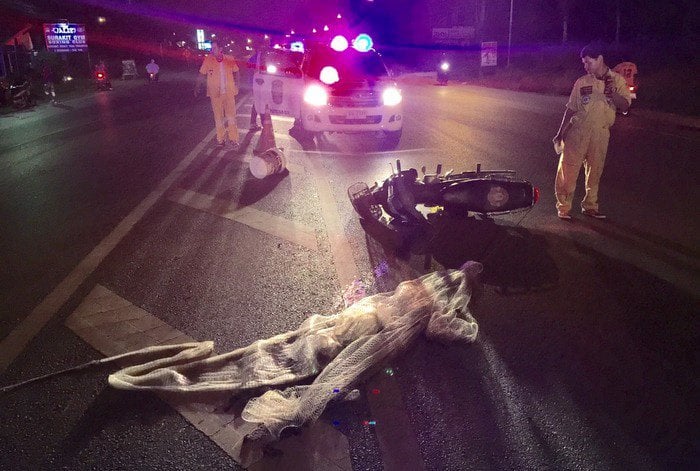 PHUKET: The CCTV network at the Heroines’ Monument is undergoing maintenance following the failure to capture the licence plate number of a white pick-up truck that was involved in a fatal hit-and-run in Phuket on Saturday night.

“The entire CCTV system there was broken, so we have no clues as to where the truck went or what its licence plate number is,” Lt Kraisorn Boonprasop of the Thalang Police told the Phuket Gazette.

Wichai Maobmai, 55, was crushed on his motorbike in the accident in front of Baan Manik boxing camp on Sri Soonthorn Road at about 10:30pm.

Mr Wichai, found fatally injured at the scene, was rushed to hospital, but succumbed to his injuries. He was found with his head pinned under a parked car.

No helmet was found at the scene, confirmed Lt Kraisorn.

“Witnesses said that Mr Wichai was driving his motorbike in the bike lane when he tried to overtake a parked vehicle,” said Lt Kraisorn.

“He was struck from behind by the white pick-up truck. The driver of the truck quickly fled the scene in his vehicle toward the Heroines’ Monument.

“It’s difficult at this point because nobody saw the truck’s licence plate number and we don’t have CCTV images.”

Police are continuing to hunt for clues that might lead to the arrest of the driver.