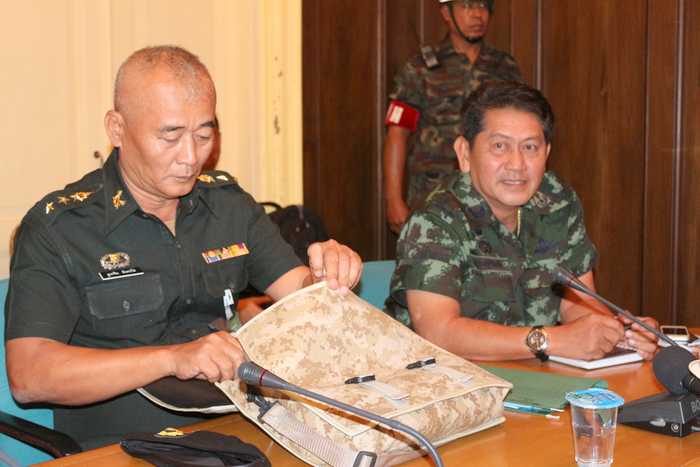 PHUKET: The military’s highest-ranking officer in Phuket under martial law has called the arrest of five soldiers for the alleged abduction of two Ukrainians on Friday a “mistake”.

“Our soldiers had been informed that a criminal from another country was hiding in Phuket,” he said.

“They checked the evidence, a document from a complainant, and agreed that the complainant genuinely represented the company he worked for and that the suspect did in fact embezzle money from that company.”

Vladimir Evladov explained in person to the press that he represented a company called Fornus, from which he alleged that Igor Iermakova, 37, had embezzled US$500,000 (about 16.4mn baht).

Mr Evladov said that Fornus had filed a complaint with the authorities in Ukraine. However, no document confirming that Mr Iermakova was wanted by the Ukrainian authorities was presented.

“We learned that Mr Iermakova had fled to Phuket, so I requested that the Army send him back to Ukraine,” Mr Evladov said.

“I contacted the Army because I believed this would be resolved quickly by soldiers as martial law is in place.”

Maj Gen Theenachat explained that the soldiers provided support as they were concerned that Mr Iermakova might flee Phuket.

“Mr Iermakova admitted that he took money from the company,” Gen Theenachat alleged, “but Ms Iermakova was worried that the soldiers would abduct him, so she filed a complaint to the police.”

The soldiers were present at the bank where the Chalong Police arrested them on Friday, but they were there only to witness Mr Iermakova uphold his agreement to pay back some of the money he owed them, Gen Theenachat said.

“The police did what they had to do. At that point in time they had to take the soldiers into custody, but that was a mistake,” he said.

One of civilians arrested on Friday – all five were present at the conference – Bandal Inmang, 35, explained that he was working as an interpreter for the soldiers.

“I invited four of my friends to come with me. I never thought it would end up like this. We are not gangsters. We have never threatened any foreigner – we are innocent,” he said.

The five civilians were released on bail of 50,000 baht each, but have yet to have the charges against them dropped as they face further questioning by the Chalong Police.

Meanwhile, Igor and Myrna Iermakova remain under watch and have yet to be released by officers assigned to their case, the Gazette was told.

Mr Elvadov told the press that he hoped that the couple would be extradited to Ukraine “soon”.