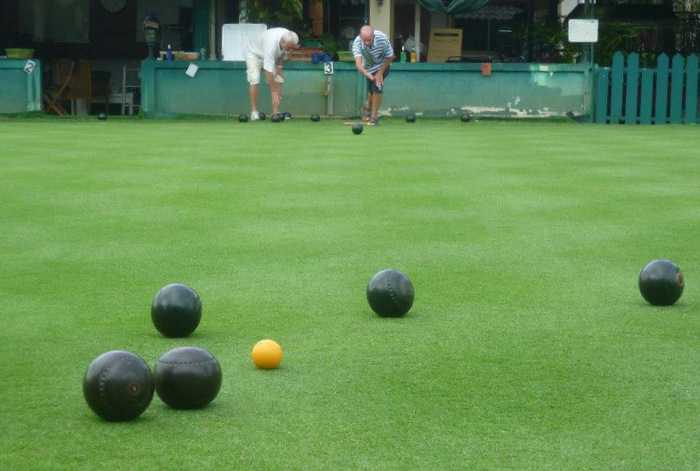 PHUKET: Late surges from the Rest of the World top order saw them come through and take the final singles 3-1 and eventually triumph comprehensively 9-5 to win Phuket’s premier lawn bowls trophy, the Pryder Cup, last Saturday.

Reigning champions, the Southern Hemisphere, who won convincingly last year, managed to force a 1-1 draw after the initial Fours games.

After that, team selection became crucial, with all pairings, games and matches drawn in secret.

Unexpected results in both directions and top-class bowling saw the Rest of the World leading 4-2 after the pairs, which put the pressure on the Southern Hemisphere heading into the singles.

Needing to win five of the eight singles to retain the cup, the “southerners” were forced to start with a strong four singles to reduce the deficit. Surprise results again in both directions meant that after the first four singles, the Rest of the World lead by two with the score standing at 6-4.

Going into the last four singles, the Rest of the World unexpectedly found themselves trailing in three of the four matches, and it looked as though the Southern Hemisphere might salvage or scramble a draw, which would have been sufficient for them to retain the cup.

However, glory was to go to the Rest of the World with excellent bowls late in the games, which saw them run out winners 9-5.

At the cup handover ceremony, special mention was given to Chuck Graydon and Rob Knight, who remained undefeated in the tournament with a 3-0 record from their games.