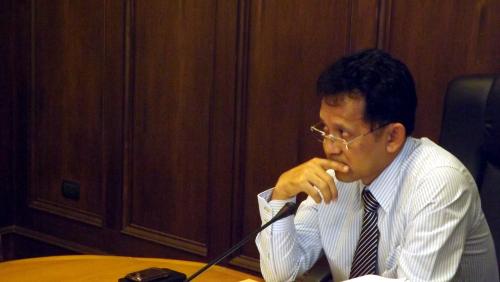 PHUKET: The ruling committee for Phuket’s public transportation authorities today agreed to price hikes of up to 36 per cent for metered taxi fares in Phuket.

Phuket Vice Governor Chamroen Tipayapongtada, who chaired the meeting of the provincial transportation committee, explained that the proposed increases in taxi fares were the same as those proposed at a meeting on August 29 (story here).

However, he added, “Even though the new fares will be more expensive than what metered taxis currently charge, they will still be about 30 per cent cheaper than what non-metered taxis in Phuket are charging their passengers.”

Mr Terayout also explained that in addition to the price increases, standard fees for picking up passengers will be established.

“Passengers who call to have a taxi pick them up will be charged a 50-baht fee. This fee will increase to 150 baht for pickups between midnight and 5am,” he said.

Mr Terayout noted that the proposed fare increases must still be approved by senior officials at the Department of Land Transport headquarters in Bangkok.

“We expect the new fares to come into effect in January,” he said.

Asadakorn Seedokbuab, a vice president at the Phuket Chamber of Commerce, voiced his support for the price increase.

“The new fares were calculated by factoring in the current cost of living and the price of fuel. They can help drivers earn enough money,” he said.

Sarayuth Mallam, a vice president at the Phuket Tourist Association, added that Phuket taxi drivers could seize the opportunity to present a more professional image to tourists visiting the island.

“I would like all taxi drivers to wear the same attractive uniform. Something similar to what Phuket’s metered taxi drivers already wear. They present a good image for Phuket,” he said.

Vice Governor Chamroen highlighted that clearly communicating the standard fares to all potential passengers was of highest importance.

“We have to make sure signs explaining the fares to tourists are posted in important places, such as at the airport, the piers and the bus terminal,” he said.

“We also have to continue to have teams of officers taking action against taxi drivers who cheat passengers,” he added.