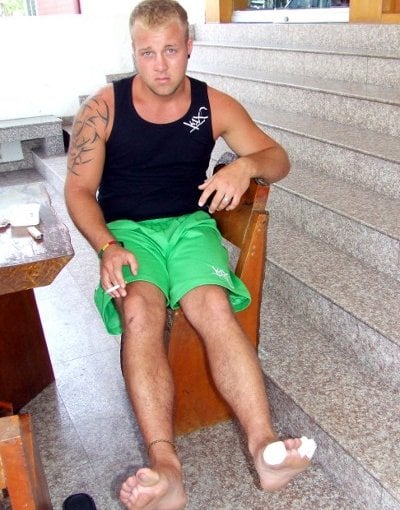 He started his Thai New Year chasing a burglar who had just robbed his rented house in Cherng Talay, tearing down the street after him barefoot and dressed only in his boxer shorts.

“I was sleeping in the bedroom when my girlfriend woke me at about at 5:30am saying someone was inside the house,” he told the Phuket Gazette.

“I went out of the bedroom to check and found the front door open and the outside light on.

“My girlfriend spotted a man outside. When I looked at him, he looked back at me and then he started running. I ran after him a long way down the soi.

“He threw my black bag at me but I kept chasing him.

“He then ran into the bushes along the side of the road, but I caught him and dragged him back to my house and told my friend to call the police.

“Before the police arrived, he kept wai‘ing us and saying sorry, but I told him not to apologize to us,” said Mr Skrzypietz.

Police arrived and found the thief, named as Khuanchai Ganpai, 28, in possession of about 35 euros and 2,960 baht in cash, two mobile phones, a lighter, a small flashlight and a set of house keys.

Sen Sgt Maj Suvarin Maudmuang of Cherng Talay Police told the Gazette that Mr Khuanchai had been arrested previously on drug charges and only recently released from serving one year in jail for attempted rape.

Mr Khuanchai, who lives with his family running a grocery shop at Surin Beach, apparently confessed to police that he had committed many break-ins in Kamala and Cherng Talay.

He targeted only houses inhabited by foreigners and entered through unlocked doors and windows, police said.

Mr Skrzypietz said he had been coming to Phuket every year on family holidays since he was a child.

He and his girlfriend, Rebecca Young, 20, arrived in Phuket on March 30 and plan to fly back to Germany on April 26.

This was Miss Young’s first time in Phuket.

“I like Phuket and I always enjoy staying here. This experience will not stop me coming back,” Mr Skrzypietz said.