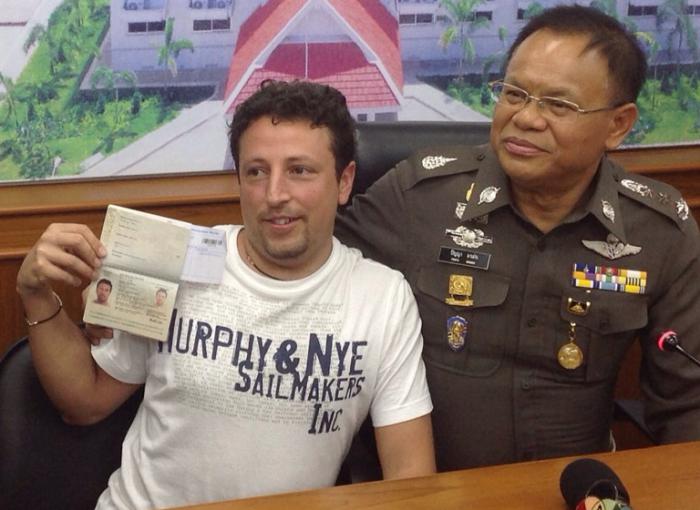 PHUKET: Police are investigating how two passports reported stolen in Phuket were used by persons unknown to board Malaysia Airlines Flight MH370, which disappeared over the South China Sea on Saturday (story here).

The probe was announced yesterday after two tourists who visited Phuket on holiday were found alive and well after being listed among the 239 passengers on board Flight MH370.

Italian tourist Luigi Maraldi, 37, was found safe at a guesthouse on Nanai Road in Patong.

“He returned to Phuket on holiday on March 1 this year. We began a search and located him after we were notified that he was listed as one of the missing passengers.”

Mr Maraldi explained to the press that he left his passport as security for a rented motorbike in Patong while on holiday in Phuket last year.

“The woman who ran the shop told me that a man had come to the shop and claimed that he was my partner – and he took my passport,” he said.

“I flew back to Italy on an emergency travel document on August 3.”

Mr Maraldi learned that he was listed as one of the missing passengers when his family called him from Italy to confirm that he was alive and well.

“I told them I am still alive and that I have never been to Malaysia,” he explained.

Mr Maraldi said he was due to conclude his holidays in Phuket on March 15, but was happy to assist police, as much as he could, in identifying the man who collected his passport.

Gen Panya told the press that his officers were also investigating the reported theft of a passport issued to Austrian tourist Christian Kozel, 30, who was also listed as missing on board Flight MH370.

“A spokesman for Austria’s foreign ministry confirmed to the media on Saturday that Mr Kozel is alive and well in Austria. The spokesman also confirmed Mr Kozel’s passport was reported lost in Phuket,” Gen Panya said.

“We are now checking which police station Mr Kozel reported his missing passport to.”

Why the men posing as Luigi Maraldi and Christian Kozel used the false documents is still unclear, reported The Guardian. Terrorism has been marked as a possibility, but so has asylum.

Six Syrians who were held in limbo at Phuket International Airport and supposed to be deported by the end of February, were hoping to seek refugee status in Sweden. However, their passports were seized in Bejiing and they were returned to Phuket (story here).

The group said they had chosen to fly through Phuket and Beijing because other refugees had reached Sweden using the same flight path, The Guardian reported.

The two men on board MH370 with the false documents had booked onward flights via Beijing to Amsterdam. One was then to depart for Copenhagen and the other for Frankfurt.