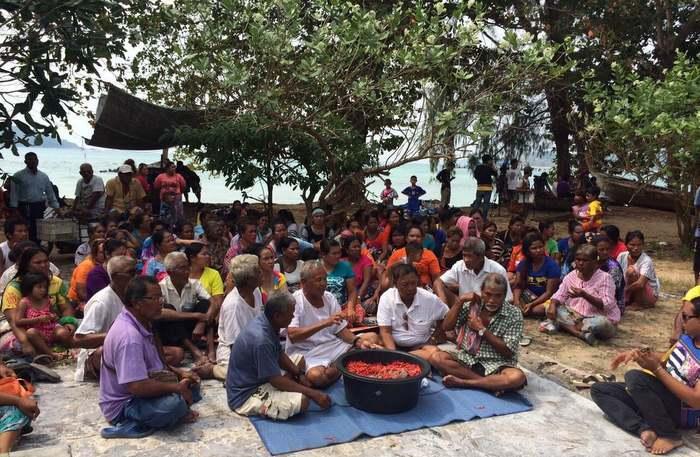 PHUKET: Rawai Sea gypsies have turned to black magic in a last-ditch effort to fend off real estate developers in Phuket.

About 200 sea gypsies took part in the ancient ‘Ah Boi‘ ceremony Saturday morning, which was attended by village chiefs from Phuket, Phang Nga and Krabi, in an effort to garner spiritual help against Baron World Trade Co Ltd. The company intends to develop a section of beachfront land, for which it holds Chanote land titles, despite DNA proof backing the gypsies’ claim to the land (story here).

The gypsies made offerings of boiled chicken, sticky rice and water while chanting and praying – completing the ceremony by burning dried chilies, salt, shrimp paste and sacred earth taken from their nearby ancestral burial ground.

They hope that the rarely used sacrificial ritual will protect their community by ensuring the land developers lose an upcoming encroachment case.

The sea gypsy leaders are confident that the black magic will work, having successfully performed the ceremony in the past with similar battles over land rights.

“The Ah Boi ritual is a centuries-old ceremony,” said community elder Ngeem Damrongkaset. “We only use this ceremony as a last resort in very critical situations, when we fear for our livelihood.”

The long-running land dispute turned violent on January 27, when boulders were put down as a barrier to block access by the sea gypsies to land they have traditionally used as a ceremonial ground.

More than 30 community members were hurt in the confrontation, which saw the military brought in to restore order (story here).

Phuket Governor Chamroen Tipayapongtada later tried to mediate between the two sides. He managed to hammer out a tentative agreement that allowed the Rawai sea gypsies to have temporary access to their traditional ceremonial site via the beach and Baron World Trade considering the possibility of donating the site to the seafaring nomads.

However, the sea gypsies say the concession is not enough, as they need access to the ceremonial grounds through adjacent private land, because the beach is difficult to traverse during high tides (story here).