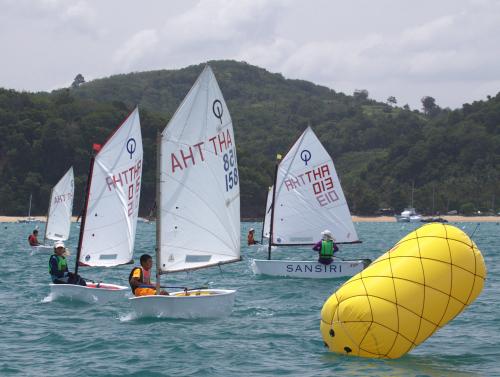 Nattapong “Max” Yoangngam, at just 11 years old, has competed in multiple Thailand National Optimist Championships, represented Phuket in the Phuket Youth Games, and has also represented Thailand at the Double Star Cup Regatta in Qingdao, China last year, and his experience showed as he ran away with the Optimist title.

Placing second in the opening race, he went on to score three firsts thereafter and take out the inaugural Junior Phuket Raceweek Optimist class title by a clear two points from another 11 year old Cartoon “Toon” Juladej, who scored a first and three seconds. Third place went to Gone, four points further back.

“We’re very happy with how the first Junior Phuket Raceweek has gone. Being the first year, our goal was to put on a competitive day of racing for young sailors, give them an opportunity to race in a professionally organized event, and judging by the smiles at the end of the day, everyone had a great time,” said Byron Jones, managing director of race organisers Media Business Services (MBS).

“Our longer term plan is to extend the format in terms of length and also number of classes. If there are other classes that wish to take part, then we’re keen to accommodate. We look forward to feedback from the sailing community on this year’s event and will let it grow organically.”

In the Topper fleet, five budding sailors lined up for a day of top competition, and again there was one who stood above the rest and it was Ta who scored a second and three firsts to secure an easy victory. Youngster Not, with a mixed bag of results, managed to hold on to second place by a single point from Long, who despite placing first in the first race couldn’t continue his form and finally placed third overall.