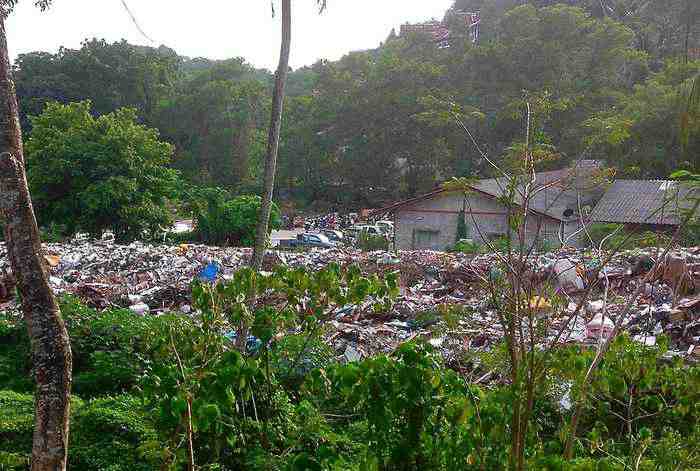 PHUKET: Officials are struggling to stem the growing tide of trash at what has become a sprawling dump site on the coastal road north of Kalim, between Patong and Kamala on Phuket’s west coast.

The news follows the Phuket Gazette receiving a copy of a complaint about the site sent to the National Council for Peace and Order (NCPO).

“These pictures are what tourists from around the world and local residents see when they drive along the coastal road from Patong to Kamala,” said the complaint, in English and in Thai, filed by a local group of residents.

“This garbage dump is filthy, covered with flies, dengue mosquitoes and is a disgrace!… Burmese families with small children sit and go through this garbage covered in flies, broken glass, putrid leaking sludge, rats and other vermin.”

In response, Kitikraisri Keawwan, chief administrative officer at the Kamala Tambon Administration Organization (OrBorTor), told the Gazette that his office had not received any orders from the NCPO.

“We are aware of the problem and we have received several complaints about it, but not from the NCPO,” he said.

“We are not ignoring it. We are trying to identify who is the current owner of the land so we can order that person to clean it up.”

Mr Kitikraisri explained that the site had long been used for dumping refuse.

“Previously, former Patong Mayor Pian Keesin was the contact person for cleaning up the site. Every time we received a complaint about the trash, we just called him and he sent men to clean it up,” he said.

“But I cannot tell you whether or not it was his land. We never bothered asking him. As the trash was on private land – within limits, people can use their own land as dump sites – and as long as it was sorted out we didn’t care whose land it was, we just wanted it cleaned up.”

However, since Mr Pian passed away earlier this year (story here), Kamala officials have no idea who to ask to clean up the site, Mr Kitikraisri confessed.

“Please understand that there is little we can do about private land,” he said. “The landowner is responsible for taking care of his or her land, which includes keeping the area clean.

“But right now we honestly have no idea who owns it. Since Mr Pian passed away, we have not been told what is going on there. We are working on it.”

Mr Kitikraisri said his officers were powerless to even install a sign to prevent people from dumping more trash on the sprawling pile.

“It’s private land. There’s nothing we can do unless the trash starts to spill onto public land,” he said.

To avoid similar complications in the future, the Kamala OrBorTor is attempting to compile a list of all landowners in the area, Mr Kitikraisri said.

“We are looking to create a database of every plot owner in Kamala, and we want to make sure that we are informed when people sell their land,” he said. “This will help to avoid problems, and not just with trash, in the future.”