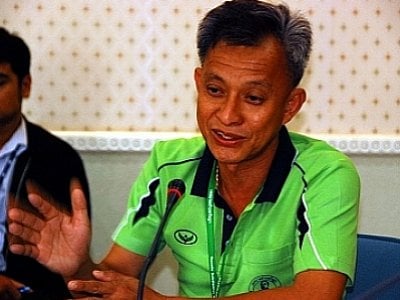 PHUKET: Local officials have decided on a “hands-off” approach to the nearly 250,000 cubic meters of soil threatening to break loose, destroy buildings and spill across the heavily-trafficked bypass road, a major artery skirting Phuket Town

Following a landslide on Wednesday morning and the alarming results of an examination of the risk area, the Rassada Municipality mayor, local officials and business owners held an emergency meeting yesterday afternoon to discuss the situation.

The risk area is along a 200-meter stretch of the northbound bypass road from Adisak Equipment company to the Chevrolet car dealership.

Rassada Village 5 headman Pipop Sadkaow said that there are about 243,100 cubic meters of soil within 20 meters of the cliff at risk of sliding down.

Rassada Mayor Suratin Lianudom pointed out that upslope and to the north there is a 20-meter-deep mine covering about five rai that has completely filled with water.

“I’m afraid if it rains heavily again, there will be a landslide. The problem is too big for us to handle now – for a long-term solution, we should make this a national issue,” Mayor Suratin said.

“I am asking for cooperation from owners of rubber plantations on the hill to not cut down their rubber trees, as they will absorb the water and help prevent landslides,” he said.

Many possible solutions were mooted at the meeting yesterday, such as building a retaining wall, terracing the soil or covering the hillside with shortcrete (sprayed concrete).

However, whatever solution is decided, the meeting concluded that nothing will be done until the monsoon season passes.

“We will not touch anything or do anything with that area – leave it as it is for now,” Phuket Vice Governor Somkiet Sangkaosutthirak said.

“After the rain has stopped falling and the soil is dry, we will decide what to do to prevent the problem in the long-run. For immediate action, we’ll have to closely monitor the situation 24 hours a day.

“I would like to ask business owners there to move out of the area. Don’t be too worried about your property – please worry about your lives and your workers’ lives,” he warned.

Adisak Lertchuwongsa, owner of Adisak Equipment store, said that six of his workers’ living quarters were destroyed in the landslide on Wednesday. They were about 5 meters from the cliff with no one inside, he said.

“Now I have to close my store on the bypass, leaving only our Phuket Town branch open. We’re still going there during the daytime to get some things, but at nighttime no one stays there,” he added.

Surasak Chanasit, owner of Eakmankong lumber store, said that he has had to rent a building across the bypass road for his 40 employees to stay in and work.

About 20 households have had to move out of the area along with several businesses.

Another meeting on the issue is scheduled for next Wednesday.

The Thai Meteorological Department forecast for today through Tuesday calls for “scattered to fairly widespread thundershowers and isolated ‘heavy to very heavy’ rain”.