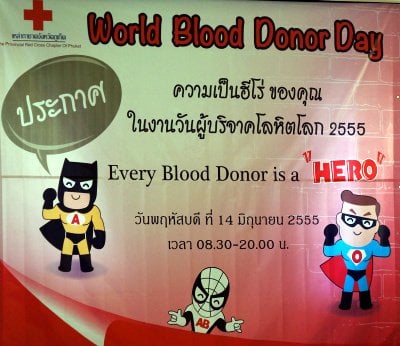 PHUKET: The Phuket Red Cross this weekend is continuing its donation drive as part of its role in the World Health Organization (WHO) “World Blood Donor Day” campaign.

Hundreds of donors turned out at the Phuket Regional Blood Center (RBC), operated by the Phuket Red Cross, on Thursday to mark the WHO international day, observed around the world on June 14.

In line with this year’s WHO campaign slogan “Every blood donor is a hero”, Governor Tri Augkaradacha assisted in handing out certificates of merit to long-term blood donors marking 48th, 60th, 72th and 84th donations by Phuket residents, both Thai and foreign.

“We, the Phuket Red Cross and the Vachira Phuket Hospital blood bank, held this event to praise blood donors who give their own blood without asking anything in return. They are such heroes,” said Phuket Red Cross President Nalinee Augkaradacha, who is also Gov Tri’s wife.

“We also expect the event to encourage more people to donate blood and to continuing donating in the future,” she added.

Joining the event on Thursday were regular foreign donors with rare blood types. Among them were Christine Kitchakarn and her friend Jean-François Falda, both originally from France.

“I have been living in Phuket with my Thai husband for almost 33 years. I donate blood every three months because I have AB-negative blood, which is very hard to find here,” said Mrs Kitchakarn.

Mr Falda added, ” I’ve been living in Phuket for almost 20 years. I have O-negative blood and I feel proud to be a blood donor.”

Since realizing they had rare blood types, Ms Kitchakarn and Mr Falda have been frequent blood donors.

“We hadn’t realized that our blood types were actually that rare. Since we became aware of that, we have kept coming back to donate blood. It has been four years now,” said Ms Kitchakarn.

“We are called up to give blood every two to three months, but sometimes hospitals need our blood type urgently, so they call us.” she added.

“Maybe one day there will be an accident and I will need blood. If that day comes, at least I’ll know there will always be my type of blood available for me,” she said.

The blood center is open from 9am to 4pm today and tomorrow for people to make donations.

The free t-shirts are still being handed out. “But stocks may not last as we had a lot of donors already,” said a blood bank worker.

Click here to see a map to the Phuket Blood Center.