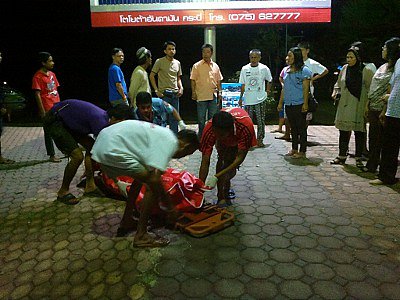 PHUKET: Police are investigating the cause of death of two Canadian sisters found dead in their hotel room on Phi Phi Island yesterday afternoon.

Lt Siwa Saneha of Phi Phi Island Police Station told the Phuket Gazette, “We received a report at about 9pm yesterday, that two tourists’ bodies were found in the same hotel room at the Phi Phi Palms Residence.

“We rushed to the hotel with medical officers from Koh Phi Phi Hospital and a rescue team.”

The sisters, one aged 20 and the other aged 26, checked in to the hotel on Tuesday.

“They went out and came back to their room that same night, but stayed in their room all day on Wednesday,” he said.

It was not until yesterday that hotel staff became concerned for the women’s welfare.

“A maid knocked on the door to clean the room on Thursday, but there was no response, so the maid thought the women needed more rest and left,” explained Lt Siwa.

The maid returned to clean the room yesterday, but again there was no response to her knocks on the door.

After repeated attempts failed to rouse the women, the maid obtained a master key to open the door.

Lt Col Rat Somboon of Krabi Provincial Police told the Gazette that officers at the scene believed that the women had died about 12 hours before their bodies were found.

“There was a lot of vomit in the room, and both bodies showed similar signs [of trauma]. They had skin lesions and it seemed that they had bled from the gums. Also, their fingernails and toenails were blue,” Col Rat explained.

“We will have experts conduct tests on the vomit and urine samples taken from the scene to try to determine the cause of death,” he added.

The women’s bodies are now being kept at Krabi Hospital in Krabi Town.

The deaths of these two women follow an American and two Norwegian tourists dying of suspected poisoning after staying at ‘The Laleena guesthouse’ on Phi Phi Island in 2009.

Extensive tests failed to provide any conclusive evidence as to what those three tourists died of.