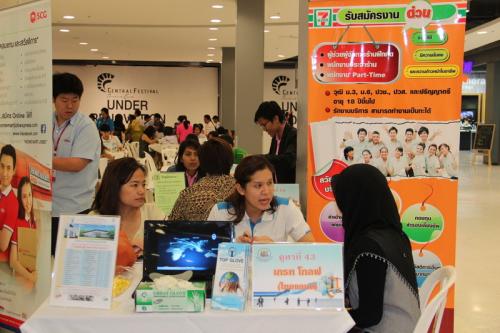 “There are more than 80 employers at the fair, offering 3,538 jobs in 685 positions,” PPEO chief Yawapa told the Phuket Gazette.

Most of the jobs available are in the hospitality and tourism sectors, but the range of positions available spans several industries, including positions at real estate agencies and retail stores.

“The purpose of the fair is to help people achieve their career goals: either job-seekers finding the right work or employers finding the staff with the skills they need,” Ms Yawapa explained.

“As Phuket is now currently in the tourism high season, people who come to the fair will have a greater chance of finding the right job,” she added.

V/Gov Sommai pointed out that the fair allowed job-seekers to get upfront information about their prospective new employer, while employers are able to quickly assess candidates’ appropriateness for filling vacant positions.

The fair continues from 9am to 5pm tomorrow.