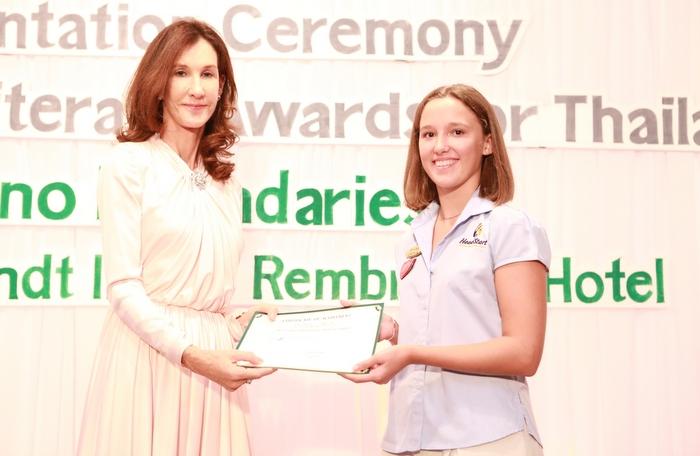 The winner of the Dublin Literary Award for Southern Thailand this year is 14-year-old British national Eve Whittaker, who is a Year 9 student at HeadStart International School.

Eve and hundreds of other students took part in the writing competition, which asked the young writers to explore a ‘World With No Boundaries’.

Currently studying for the World Scholar’s Cup, under the theme ‘An Imperfect World’, Eve was inspired to write about the physical and metaphorical ways a world without borders would function. Her unique take on the idea of a world with no boundaries, and her exemplary command of the English language, saw her sail ahead of the other applicants.

She hopes that by continuing her studies she will one day be able to combine her passion for writing and foreign languages by becoming a foreign-language correspondent for a multinational news agency.

Here, unedited, is what she wrote to win her award:

PHUKET: In our world, we have many boundaries restricting people in everyday life. This means that our lives are structured to how the government wants us to live. We have rules and laws about everything we do, from what time we have to be at work to that we shall not kill or harm any human being. However, have you ever wondered what life would be like if we lived in a world with no boundaries? Well I have, and in my opinion the world would be chaotic if there were no rules restricting what we did.

A boundary is a dividing line; to most it is the line between right and wrong. The boundaries I am going to be talking about are metaphorical and literal barriers, boundaries and restrictions to keep society safe; these can be called rules and regulations or even laws.

Why do you think we have boundaries? We have boundaries to regulate society, to protect citizens, to make sure people have rights and to stop conflicts. Boundaries are there to stop people from having negative effects on the quality of people’s lives.

In life, it is beneficial to have boundaries and laws for societies to live in a safe and peaceful world. If we suddenly decided to take away all of the rules and regulations we had, then life would be anarchy. There would be crimes taking place all of the time, from murders to thefts. Boundaries and laws are usually made for the safety of the people, to make sure that a murderer is imprisoned to keep the rest of society safe and for them to be rehabilitated. Therefore, boundaries are there to make people feel safe and to know what is acceptable behavior.

Meanwhile, in some countries many people argue that there are too many laws and too many prisoners. Surely this means that boundaries aren’t working, because people are still breaking them? In fact, in America, the justice system is a lot harsher than in other More Economically Developed Countries. Between 2.3 and 2.4 million Americans are behind bars, this is roughly one in every 100 adults.

“I don’t think this is what our laws are meant to do,” said a judge of the Spring Texas state courthouse. “It costs upwards of $50,000 a year to have a single person in the state prison. This isn’t right and is not working.”

But is there an alternative?

Surprisingly, according to a BBC article on laws, most adults actually break the law somehow every day without even realizing it. Millions of people who declare themselves as law abiding citizens actually commit around seven crimes a week. The most common offenses are: speeding; texting or eating while driving; drunk driving; downloading music illegally; and not wearing a seat belt.

Since living in Asia, I have seen and experienced people breaking the law frequently without any consequences. It is common sense that there is a law requiring people to wear helmets on a motorbike. However, if it is a law that is set to protect citizens, why do the majority of people still ride a motorbike without a helmet? It is one thing to have laws, but it is another to have to enforce the laws so that people actually follow them. It could be argued that if a law is not enforced, then it is actually encouraging people to break it.

If we didn’t have any boundaries, I believe that we would live in fear and all of the strongest and most powerful people would control our society. As a result, it is important that laws are enforced and protect citizens, ensuring that we live in a safe and healthy environment.

Now you know why there are boundaries in society and what life would be like if we didn’t have them. Next time you complain about having boundaries and want to break them, think before you do it; think before not putting on your seat belt and think before doing anything else that breaches boundaries established for your safety.

Gardening: Lest we forget the magic of orchids

Blazing Saddles: Back in the saddle at Bang Tao