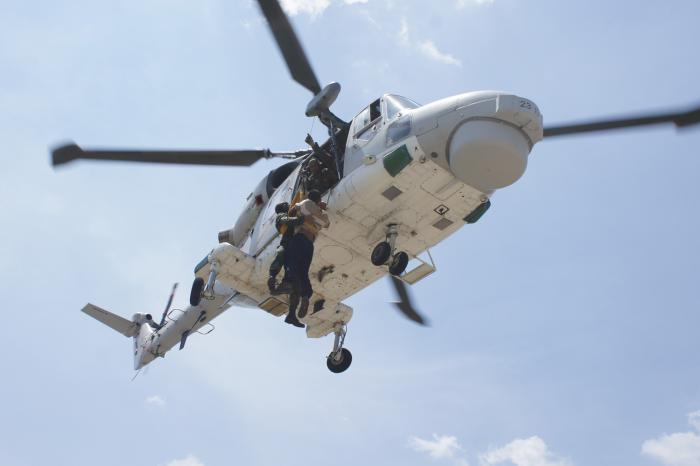 PHUKET: Patong Municipality held its annual full-scale fire and evacuation drill this week, complete with a Navy helicopter airlifting a survivor to safety from a beachfront resort’s rooftop.

The venue was the Phuket Graceland Resort & Spa on the Patong beach road, where three staffers and a carpenter were injured in a fire that broke out in the laundry facilities in December (story here).

“The exercise simulated a fire breaking out in a hotel room on the third floor. A maid discovers the fire and reports it immediately to the front desk. Staff then calls in the fire brigade,” explained Sampawat Wannasangkam from the Patong Fire Department.

“Hotel staffers try to put out the fire, but as the blaze grows beyond their control, they order the building to be evacuated. The Patong Fire Department is called in and the Patong office of the Phuket Provincial Electricity Authority cuts off power supply to the hotel.”

During the simulation, 11 people are trapped by the flames: 10

stuck in a room on the fourth floor and another one on the rooftop.

“The people on the fourth floor had to escape the fire by jumping to safety and landing on an air mattress or by using a flying fox, while a Navy helicopter rescued the person on the roof,” Mr Sampawat explained.

Vice Governor Chamroen praised the emergency crews and the resort staff for how they conducted the exercise, but called on them to keep practicing their firefighting and evacuation skills.

“Patong is one of the most important tourist attractions in Phuket, and ensuring annual fire drills are carried out is very, very important,” he said.

“Not only are fire drills required by law, they also instill confidence among tourists that we are prepared to respond quickly and effectively if a fire does break out.”

PACC Dives in on extortion charges