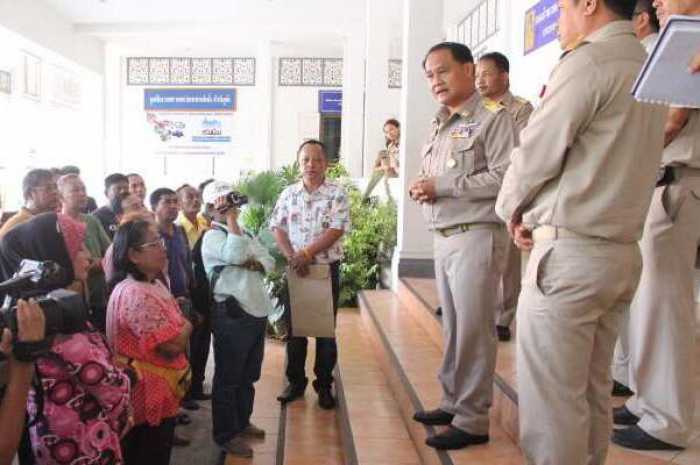 PHUKET: More than 100 out-of-work beach vendors gathered at Phuket Provincial Hall yesterday to file a complaint with the governor regarding a land encroachment investigation by the Karon Police.

The vendors presented the letter to Governor Nisit Jansomwong – along with a letter from the Ministry of Interior, dated January 3, 2005, that gave permission for people to operate businesses on Phuket’s beaches following the 2004 tsunami.

“Locals were approached by Karon Police officers and questioned about illegal land encroachment from when they were working on the beaches before the National Council for Peace and Order [NCPO] cleanup campaign,” said Palat Jantarasopin, leader of the Tourism Service Operators Club.

“The police did not present any documentation explaining the purpose of the investigation or who ordered it. The lack of transparency about the origins of this investigation scares us.”

When asked about the allegations, Karon Police Superintendent Natthapakin Kwanchaipruk confirmed to the Phuket Gazette today that he was aware of the investigation, but was not sure why the vendors filed a complaint to the governor.

“If we believe someone was, or is, breaking the law by encroaching on public land, it is our responsibility to investigate,” Col Natthapakin said.

“We will take into account any documentation or evidence proving that the vendors were operating legally at the time.”

After presenting their complaint, vendors begged the governor to reveal the Phuket-beach plan and any possibility of them finding work on the sand again.

“It has been four long months since so many beach vendors lost their jobs. We have yet to hear any solution,” Mr Palat said.

Gov Nisit told Mr Palat and the vendors present that he would pass on the complaint to the relevant authorities, who would handle it from there.