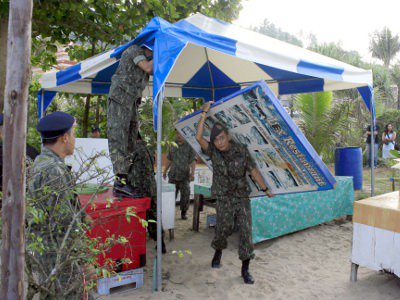 PHUKET: A team of about 50 police and municipal officers this morning arrived in force at Phuket’s tourist-popular Karon Beach and removed a restaurant belonging to a local family who were forcibly removed from the same location nine weeks ago.

The officers took two hours to remove the offending structures, located in front of the Centara Grand Beach Resort.

Unlike the last time the restaurant was torn down, on September 20, there were no incidents or claims of excessive use of force by the police.

“This is the second time we have pulled down this restaurant. We received a complaint in September and I assigned a team to pull down the structures. Then we received another complaint, so I assigned officers to check it out. When we found out structures were still on the beach, we returned in force today,” Governor Tri said.

All items removed will be kept at the Kata-Karon Municipality office, he added.

The governor said that he will also assign a team of officers to monitor encroachment at all Phuket beaches.

“We are not picking on any particular area. All beaches are to be protected through law enforcement.

“However, this must be done one [beach] at a time. At other ‘problem’ beaches we will start by explaining to beach vendors that they cannot build anything on the beach.

“If they continue to break the law, they will be forced to move through law enforcement,” he said.

“For residents who rely on the beach as a means to make a living, we will have a meeting to discuss options and appropriate areas where they can set up their businesses,” he added.