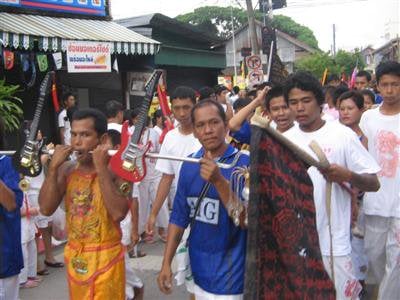 PHUKET CITY: The Vegetarian Festival got into full swing this morning, when the Jui Tui Shrine, in downtown Phuket City, held its annual street procession.

Scores of picture-popping tourists who turned out for colorful event didn’t leave disappointed, as those who braved the deafening sound of firecrackers and banging drums were able to catch wave after wave of spirit mediums (mah song in Thai) and other devotees as they passed by.

Although there are no official estimates of the number of people who took part, observers viewing the event from the intersection of Krabi Rd and Patipat Rd agreed it was the largest and most spectacular street procession ever.

There were the usual male mah song with a mind-numbing assortment of sharp instruments pierced through their cheeks: bars, poles, blades and hatchets, to name just a few.

One duo walking side-by-side were both pierced through by a three-meter-long chromium bar, upon which several electric guitars were affixed in an upright position.

There were also a large number of female mah song.

These ranged in age from young teenage girls sucking on pacifiers or drinking from baby bottles to the very elderly, who needed to be supported as they walked past bestowing blessing and treats to the devotees lining the streets.

Jui Tui is understood to be one of the largest and best funded of the participating shrines, the number of which grew to 18 this year.

Panu Maswongsa, Vice President for Marketing at the Phuket Tourist Association (PTA), said he was surprised by the strong turnout of ethnic Chinese from other countries this year, especially from mainland China.

Noting that the Kathu Shrine dates back 250 years, he said visitors from mainland China were particularly interested in the festival and its cultural traditions because the Cultural Revolution in China in the 1960s and 1970s had broken many longstanding traditions there.

Fascinating Chinese inscriptions on a wooden door at Kathu Shrine even make reference to the ancient Ming Dynasty, he said.

The PTA is now working on a project to distribute information about the festival through Chinese magazines as a way of generating even more interest, he said.

Highlights scheduled for later today include:

There will be three more street processions tomorrow:

Starting from the Shrine following a route into Phuket Town.

Starting from the Shrine following a route into Phuket Town.

Starting from the Shrine following a route into Thalang Town.