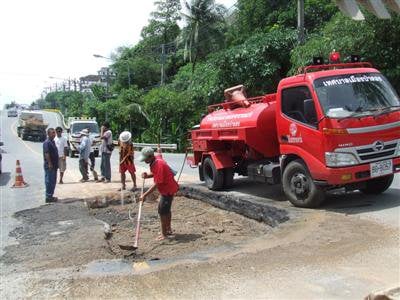 PHUKET CITY: Conditions on the already-treacherous Patong Hill road took another turn for the worse yesterday, when another sinkhole appeared just meters from a similar cavity that was hastily repaired in late August.

The hole had enlarged considerably by morning, he said.

Municipal workers under orders from Mayor Pian Keesin were busy today excavating and refilling the hole.

Workers from the Highways Department are expected to join the effort soon, he said.

Sources at the municipality told the Gazette after the first sinkhole appeared that two drainage pipes once channeled runoff under the low-lying stretch of road.

Installation of an electric power pylon in the area obstructed flow to one of the pipes, causing excess runoff to flow under the pavement, resulting in erosion, according to the source.

Drainage has long been a problem on the road, where sheets of water flow like a river across the surface during torrential monsoon-season rains.

Remarkably, a section of the road near where the sinkholes emerged would need to support a large concrete overpass if one option of the Patong Tunnel plan, now under study by Bangkok-based consultants, gets the go-ahead.