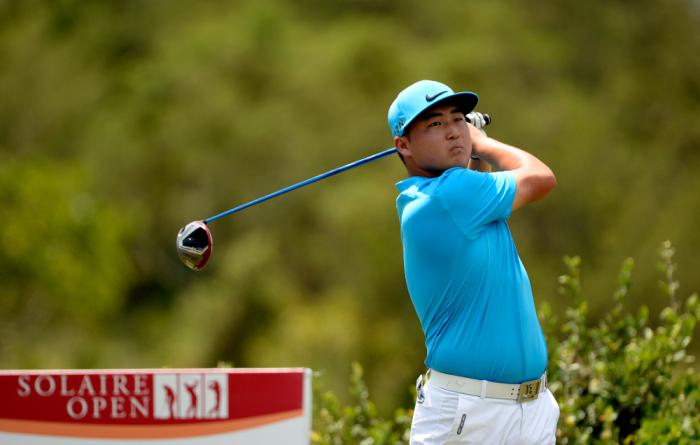 PHUKET: Canada’s Richard T Lee learned a thing or two about the rewards of hard work and even a stroke of lady luck when he won his maiden title at the casino-backed Solaire Open last weekend.

On Sunday, all these winning combinations propelled him towards the finish line and earned the 23-year-old his career breakthrough on the Asian Tour at the US$300,000 event.

“This is the biggest win of my career and it feels great! I’ve worked hard to get this win, and it has definitely boosted my confidence and how I approach each tournament from now on,” said Lee.

Since making his debut on the region’s premier tour by virtue of his second placed finish at Qualifying School last year, the Canadian, whose parents are Korean, went on an astonishing run where he did not miss a single cut in all 11 starts.

He posted three top-10s in his rookie year, which included a runner-up finish at the inaugural Solaire Open last year.

Missing out on the grandstand with his several near-misses only forced Lee to step up his game.

“This year I had a different mind-set. I practiced a lot on my putting and chipping. My game feels great now, and I know exactly what I want I want to do on the golf course,” said Lee.

While Lee’s brilliance shone on The Country Club, he did not discount that lady luck smiled at him too after home favorite and overnight leader Angel Que shot a disastrous 12 on the par-five second hole to effectively quash all his hopes of winning again on home soil.

“I wished Angelo luck yesterday and told him to play his best. It was unfortunate to see what happened to him,” said the 23-year-old.

With his win, Lee shared the limelight with India’s Rashid Khan in first place on the Asian Tour Order of Merit.

Thailand’s Chawalit Plaphol also made his move by leaping 22 spots up the Order of Merit to fourth place after finishing second at the Solaire Open.

While he was denied his fifth Asian Tour win by the brilliance of Lee, the 39-year-old believes his return to the winner’s circle will not be long if his good form is anything to go by.

The Asian Tour will take a week’s break before heading to Malaysia for the inaugural EurAsia Cup presented by DRB-HICOM.

The Ryder Cup-style showdown will pit the best players from Asia and Europe in a tantalizing match play contest at the Glenmarie Golf and Country Club from March 27-29 with Team Asia captained by three-time Order of Merit winner Thongchai Jaidee of Thailand.