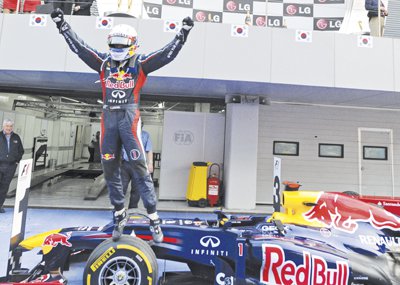 PHUKET: Sebastian Vettel’s victory in the Korean Grand Prix allowed him to take the Drivers’ Championship lead from Fernando Alonso. Vettel now has a six-point lead and is on track for his third consecutive title.

Korea was Vettel’s third successive victory and he is the first driver to win four races this season. His teammate Mark Webber was second in Korea, so Red Bull now has a 77-point lead in the Constructor’s Championship.

Ferrari has overtaken McLaren in the Constructor’s Championship, which they did not expect. McLaren lost Jenson Button when he was hit by Kamui Kobayashi on the first lap, and Lewis Hamilton had an awful race.

Alonso passed him on the main straight of the first lap, and he was the only driver to take a third pit stop – tyre-wear from a broken anti-roll bar. Then he collected some green carpet from the outfield, which he trailed for the last three laps, badly affecting his rear downforce, and he dropped back.

Unless something extraordinary happens, Hamilton’s title hopes are over; he is 62 points behind Vettel with only 100 points still available in the remaining four races.

Lotus’ Kimi Räikkönen was fifth in Korea, stretching his lead over Lewis Hamilton, but he is still 48 points behind Vettel.

So what will India hold this weekend? It seems that Delhiites are underwhelmed. Observers are expecting a 50 per cent capacity crowd, despite discounted tickets.

Indians like Indian wins, and they are not going to get one. The only promised public excitement is a demonstration by employees of the troubled Kingfisher Airline against their flamboyant Chairman Vijay Mallya, also promoter of the Sahara Force India F1 Team.

According to McLaren, the Indian GP is the most awkward race of the year in terms of customs. Ferrari tries not to go to India with additional equipment because of the risk of not getting it on track, or not getting it back for the next race. The Sports Ministry can issue a certificate for customs to exempt import duties. It has not done so because F1 is “of no national importance”. Unlike many F1 events, the Indian GP is a wholly private event. Visas also proved to be an issue last year.

The approaches to turns three and four are exceedingly wide to stimulate overtaking. There is a challenging flow of corners from turns five to 15, especially the long right-hander at turns 10 and 11. This puts high loads through the front-left tyre. Pirelli is providing harder tyres and the hard one could be a challenge. The circuit is likely to be dusty and hot, which will spice things up, but the surface isn’t abrasive, so tyre wear should not be a big problem.

Vettel won last year, followed by Button. Then it was Alonso and Webber. The result could be similar again, but Kimi Räikkönen has not driven the circuit before, and could be a dark horse, while Hamilton will be keen to win.

The race will be shown live at the Green Man on Sunday at 4:30 pm. Qualifying is Saturday at 3:30 pm. Click here for more information.