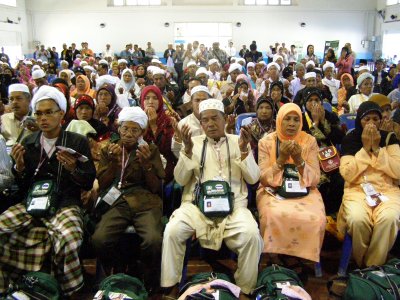 PHUKET: A Saudi embassy announcement yesterday that it will issue the 13,000 visas necessary for Thai Muslims to join the Hajj this year comes as welcome news for Phuket Islamic Committee President Bamroong Samphaorat.

“Saudi Arabia – under no circumstances – associates its relations with any country, with allowing or forbidding Muslims from performing their fifth pillar of Islam of Hajj,” read the statement issued by Saudi Charge d’affaires Nabil Ashri.

At a meeting at Provincial Hall, Mr Bamroong told Phuket Vice-Governor Theerayut Eimtrakul that about 350 Muslims from Phuket and neighboring provinces had yet to have their visa applications approved.

He asked the government to explain the situation and help resolve the problem as soon as possible, as Phuket Muslims were fast running out of time with the Hajj due to begin in mid-November.

The announcement by Saudi officials yesterday comes in the footsteps of the latest international spat between Thailand and Saudi Arabia, this time over the proposed promotion of Pol Lt Gen Somkid Boonthanom to the post of assistant national police chief.

The Saudi government asked that Gen Somkid not be offered the promotion because of his alleged involvement in the 1990 disappearance of Saudi businessman Mohammad al-Ruwaili.

Gen Somkid is one of five suspects indicted over the incident.

The meeting in Phuket on Wednesday was to coordinate government and local agencies in facilitating the pilgrims’ preparations for making the journey, including obtaining visas and arranging pre-travel health checks.

Two charter flights by Thai Airways are scheduled to depart Phuket on October 17 and 18; and return on December 8 and 9, respectively.

Hundreds of family and friends turn out at the airport to see the pilgrims depart each year. For many making the journey, it is their first time on a plane and their first time leaving the country.

Phuket braces for another anti-smoking crackdown