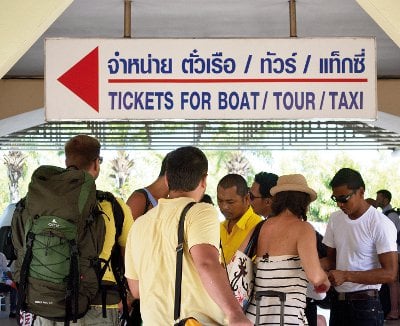 PHUKET: To ensure tourist safety during the upcoming New Year holiday period, the Phuket Marine Department office will step up inspections and open a safety center at its office in Wichit, the agency has announced.

Phuripat Theerakulpisut, chief of the Marine Department Region 5 office, said his agency is gearing up for an expected large influx of tourists over the upcoming holiday period.

As a precursor to the peak period, which runs from December 30 through January 3, Marine Department officials will step up inspections at government piers, private piers and marina facilities on the island.

These will include popular ferry piers, such as Chalong Bay, Rassada Harbor, Klong Thajeen, Ao Por, Bangrong and the Boat Lagoon, he said.

The inspectors will be looking for violations of safety regulations and ways to improve transport efficiency to outlying islands such as Koh Phi Phi in Krabi.

This effort will be coupled with a multi-media public relations effort aimed at getting vessel operators to fully cooperate with officials in inspections, which are made to ensure all vessels are seaworthy, properly licensed and equipped with the correct safety equipment, both in type and in number. Inspectors will also check to ensure that all piers and related facilities are structurally sound.

“The Phuket Marine Department office conducts such inspections year-round, but we have to step up the effort over the holiday period to make sure vessels are not overloaded. For this reason I ask all operators to review their loading limits and strictly adhere to them. [For their own safety] I also ask passengers to take note of passenger load capacity figures, which should be clearly visible on each vessel,” chief Phuripat said.

The number of life preservers required to be on board is based on the maximum load capacity of the boat, he added.

From December 30 to January 3, inspectors will be divided into two units to conduct operational safety inspections: one for piers and one for passenger transport vessels.

Also during this period, a “Marine Transport Safety Center” will be set up at the Marine Department Region 5 Office in Phuket Town to oversee the safety efforts and to respond to any emergencies during the peak season period, he said.

This will be the first time such a center has been established in Phuket, he confirmed to the Phuket Gazette today.

Also looking to improve safety and claim a competitive advantage are local speed boat operators, who are joining together to set standard queues and prices for peak season. One of their selling points, they say, is that their understanding of the local ocean environment allows them to be safer boat-tour operators. For more on that story read the Phuket Gazette out this weekend.