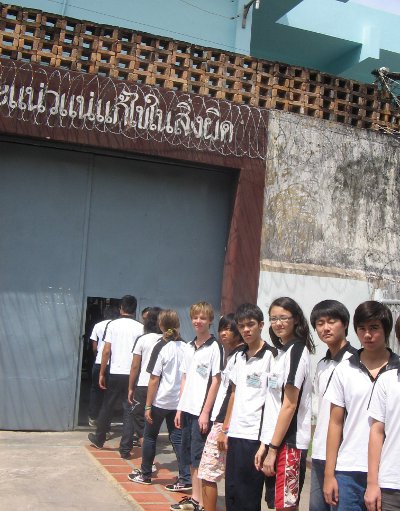 PHUKET: More than 200 inmates at Phuket Provincial Prison will be back on the streets soon, following the Royal Pardon decreed by HM King Bhumibol Adulyadej on the occasion of his 84th birthday yesterday.

Phuket Provincial Prison Director Rapin Nichanon said prison officials were still reviewing the paperwork and could not give an exact figure on how many inmates would be released on pardon. However, he was sure that the final figure would exceed 200, he said.

The mass pardon could not have come at a better time. The current prison population is at an all-time high of about 1,700 inmates, he said. This is far more than double its design capacity of 700.

A release of 200 prisoners would represent an 11.7 per cent drop in the prison population.

The first batch of 143 pardoned inmates will walk out of the 109-year-old facility between 8am and 9am on Thursday, said chief Rapin.

As many as three more group releases would follow soon thereafter, he added.

“We still don’t know just how many inmates serving time on drug-related convictions will be released. We have to review the terms of the pardon against each case file. All we know at the moment is that the first batch will be of 143 inmates. They will be very happy to go home,” he said.

In other prison-related news, chief Rapin encouraged the public to stop by the facility’s new massage center, located next to the prison grounds on Damrong Road.

“The massage center is already open and ready for customers. It is open from Monday to Friday from 8am to 4 pm, but closed on weekends and holidays,” he said.

The masseuses, all female inmates with good behavior records, provide traditional Thai and foot massages for 120 and 130 baht, respectively. Half of the proceeds go to the masseuses, with the remainder divvied up among the prison, its staff and the national Department of Corrections.

One satisfied customer who used the service recently said he was quite happy with the level of service.

“One thing I like is that they aren’t allowed to have mobile phones so they keep using both hands throughout,” he commented.