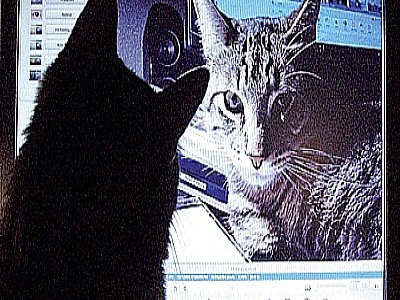 PHUKET: Three weeks ago, I lamented the imminent passing of CAT’s EV-DO service – the original high speed wireless “AirCard” that ushered in a new, faster way of surfing the web without getting plugged in.

At the time, I was told that EV-DO would continue to work through the end of the year. Today, I found out differently. CAT’s going to dismantle its entire EV-DO network, at least in Phuket, by August 31. The end is near.

If you currently have CAT EV-DO, you need to figure out what you’re going to do with that soon-to-be-useless USB dongle, and how to move on to the next version of wireless internet.

Fortunately, there’s a good alternative. CAT. No, really. Even while they’re pulling up their old service, they’re rolling out a new one, called My Click. I can’t say much for the branding, but the service itself is compelling.

Keep in mind that CAT is using the TrueMove-H network. (I guess, officially, TrueMove-H is using the CAT network, but that’s kind of a political hot potato at the moment.) That means CAT has a well-established, functioning HSPA+ network, here in Phuket – available at a very good price.

I had a chance to talk about the service at length with the folks at the CAT office in Central Festival (opposite the Apple store), and I was amazed at what they told me.

First, coverage. The CAT HSPA+ network hits just about everywhere in Phuket, up to Khao Lak, over to Krabi town, Koh Lanta, Ao Nang, and Phang Nga town, with other locations coming on quickly.

That matches my experience. I was astounded to find a 3G signal (from TrueMove-H) north of Khao Lak several months ago, at the ferry terminal for Koh Kao Khao. Believe me, that’s off the beaten track by a kilometer or two. CAT’s rolling the equipment out everywhere.

If you live in a spot in Phuket that may be iffy, all you have to do is leave your address with the folks at the CAT counter in Central. They’ll check your actual location and let you know if the signal is strong enough to reach. They have people who go out and check every weekday.

CAT has a Google map of coverage areas at mybycat.com.

Note that you don’t need to have a laptop or tablet computer to take advantage of wireless broadband: you can stick a dongle on any USB port on your desktop computer, too.

You may find the reception’s better if you have a USB extension cord, and can twist the dongle around a bit. And, yes, USB dongles work on Macs, too (although you need the “3G” version of an iPad to get the CAT service – a WiFi-only iPad cannot connect).

It gets better. If you go to Bangkok, or travel through much of central Thailand, you can use your CAT dongle (or CAT SIM card in your phone or tablet) to get on their HSPA+ network everywhere that TrueMove-H has coverage – which includes almost all of the urban areas in Thailand. The trick: you have to choose roaming with TrueMove.

Although you’re theoretically roaming, there’s no roaming charge – something about an agreement that TrueMove has with CAT.

If you do have an EV-DO “AirCard,” there isn’t much you can do with it. You have to buy a new USB dongle.

At this moment, CAT’s run out of dongles, but they’re readily available at JIB and Banana IT for about 1,300 baht. Almost all dongles these days will work with the CAT network, but if you have any questions, be sure to look for HSPA coverage at 850 MHz. That’s the magic combination.

Once you have a USB dongle for your computer, or a new SIM card for your phone or iPad (cost: 99 baht), you have to sign up for one of CAT’s service plans. The best deal, by far, is their “unlimited” plan which gives you up to 4 GB of data per month – enough for almost everybody except those who upload or download lots of videos, or run torrents for movies or TV shows.

After you hit 4 GB of usage, the line gets cut down to a much slower speed, until the month’s up and you go back to sailing.

The speed reporting site at phuketinternetspeed.com shows download speeds between 600 Kbps and 1,400 Kbps – which is comparable to many wired connections on the island.

I’ve tested the TrueMove-H connection in Patong, Sam Kong, Sai Yuan, and inside Central Festival, and consistently see speeds of 450 to 650 Kbps. That’s downright decent for a wireless connection, although the CAT EV-DO service has been running around 850 to 900 Kbps. Much depends on your line-of-site proximity to a CAT tower.

CAT’s “My Click 590” package is 590 baht per month, which is quite a bargain, even by international standards. No wonder they’re selling a ton of them. They’re competing directly with TrueMove-H, which offers precisely the same service for 799 baht per month.

If you’re Thai, take your ID card to CAT and they’ll sign you up. If you have a work permit, take a copy of your passport or work permit to the CAT office. (You might want to take your computer, too.)

If you don’t have a work permit, you have two options: convince a friend with a Thai ID card to go along with you – realizing that they’re on the hook, financially, if you don’t pay your bill; or, get a prepaid card.

The prepaid service is quite reasonable. The last time I checked it was 399 baht for 15 days “unlimited” which is, in fact, throttled after you hit 4GB of data traffic.

The 800 pound gorilla sitting in the CAT office is the long-anticipated auction of new “3G” spectrum, which may or may not happen this year.

If the government finally gets its act together long enough to attract bidders and allow them to start building out their systems, we may be treated to some much faster wireless internet speeds. Some day. Maybe.

In the interim, right now, you can get decent wireless access for about 1,300 baht plus 590 baht per month. Even if you switch in six months (or a year, or two, or three) that’s a good deal.