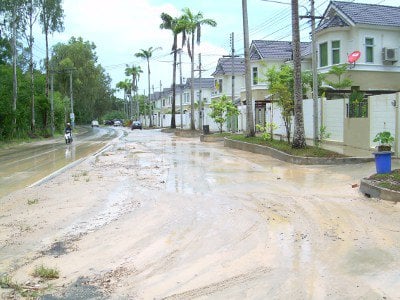 PHUKET: Governor Tri Augkaradacha has urged officials and local agencies to be vigilant in preventing flooding and landslides near construction sites and at recently completed housing projects.

The call followed the Thai Meteorological Department on Wednesday issuing a wet weather warning for 15 provinces in southern Thailand through the end of the month.

Heavy rains caused by a monsoon trough over the Andaman Sea have since soaked Phuket.

The governor told officials gathered at the Land Office to be wary of drains blocked by silt and muddy runoff from nearby construction areas denuded of foliage.

Land Office chief Paitoon Lertkrai said, “We are taking extra care to ensure construction follows the EIA [Environmental Impact Assessment] that was approved for the project, with special attention given to the size of the drains and waste-water systems.”

Mr Paitoon said that about 50 residential housing projects were currently underway in Phuket, 12 of which were approved last year.

“Some of them have just been completed,” he said.

Only two housing projects have been approved this year, he added.

“It’s normal to receive some complaints about flooding while any project is under construction. The complaints usually stem from drains being blocked,” he added.

However, the Land chief pointed out that potential Phuket home buyers were getting smarter.

“The number of complaints about housing projects is decreasing as people are now more astute. If any projects have flooding problems, they simply will not buy the houses in these projects,” he said.