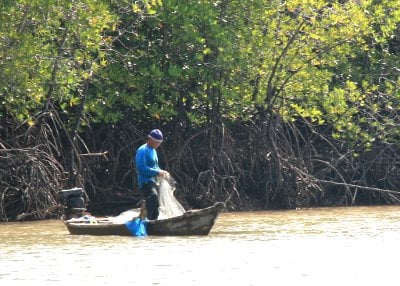 PHUKET: Some of the issues facing Phuket’s sea gypsy communities were resolved in a meeting yesterday, held in accordance with the Ministry of Culture’s plan to improve the quality of life of sea gypsies in all six of the Andaman provinces.

The meeting follows more than 2,000 protesters, including sea gypsies and members of other landless communities from across the country, mobbing Prime Minister Yingluck Shinawatra at Phuket International Airport when she arrived for the mobile Cabinet meeting in March

Though the first issues raised during the protest in March were fishing and land occupation rights, the meeting yesterday focused on the ongoing issue of national ID cards for sea gypsies.

“The main problem, that must be resolved, is the lack of ID cards for sea gypsies in Ban Laem Tukkae and Baan Sa Pam,” said Vice Governor Somkiet Sangkaosuttirak.

“Many issues are the result of [sea gypsies] having no official documentation to prove that they are Thai nationals,” he explained.

Sumran Yukunthorn of the Phuket Provincial Office gave a detailed explanation of the process.

“Sea gypsies need to contact their local village headman to certify their Thai nationality, after which the village headman will send the necessary documents to the Provincial Administrative Office.

“Then the names can be added to the community registrar and the legal documents can be processed and submitted to the local District Office to issue the ID cards,” he said.

The other central issue addressed at the meeting was the lack of tap water for the sea gypsy community in Rawai.

“We will set up a water supply and meters for each house in the community,” said Pichai Wetchrungsri Deputy Director of the Phuket Waterworks Authority.

“Rawai Municipality will be responsible for providing free water during periods of drought,” he explained.

Despite the many concessions made at the meeting, Awiwut Chueadee of the Phuket Provincial Fisheries Office explained that his office will not budge on granting special permission to the sea gypsies for fishing in protected areas.

Previously, Sutha Pratheep Na Thalang, a local representative of a traditional fishing group, claimed that his people had been fishing in many of the protected areas for more than 100 years and that it was fundamentally how sea gypsies earned their living.

“I don’t understand why we have to change our entire way of life because of these laws,” he said in November last year.

However, Mr Awiwut said yesterday, “We cannot allow anyone to fish in the protected areas, but we will recommend that the Provincial Administrative Office considers providing [sea gypsies] more areas to fish in.”

All the representatives at the meeting were instructed to have their offices draw up plans to address the concerns raised at the meeting. They were to report these plans to Vice Governor Somkiet and arrange another meeting to follow up on them.