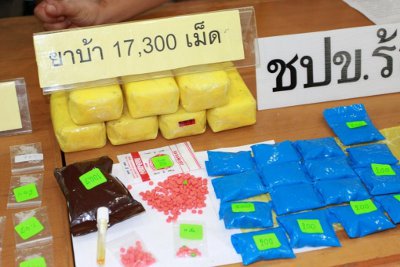 PHUKET: The lead officer in the investigation that led to 12 million baht in methamphetamine being seized in Phuket last weekend has told the Phuket Gazette that the bust was the “tip of the iceberg” of the true volume of drugs being trafficked to the island from Bangkok.

Kittisak “Ton” Sew-Eaw, 29, from Phuket, and Dusit “Boy” Chaiphan, 30, from Petchabun, were arrested in Rawai on Saturday after a sting operation was set up by officers from Bangkok Metropolitan Police.

The two men were arrested at a delivery company office after receiving 20,000 pills of ya bah (methamphetamine) and one kilogram of ya ice (crystal methamphetamine) packed into two separate bags, said Lt Col Prawit Engchuan of Phuket City Police.

The pair were also found in possession of an unregistered .22 Smith & Wesson revolver, a 9mm Glock handgun and three rounds of 9mm ammunition, he added.

The drugs were received after being transported to Phuket on the back of a standard delivery service truck.

“The suspects were charged with possession of a Category 1 drug with intent to sell and illegal possession of firearms,” Col Prawit said.

The arrests came after an investigation by officers from Bangkok Metropolitan Police (Region 7) revealed Phuket-native Kittisak to be a key suspect in a large drug-trafficking network.

After tracking Mr Kittisak’s movements, the Bangkok officers alerted their Phuket counterparts to the impending shipment arriving in Rawai and organized a coordinated raid to arrest the two suspects in one fell swoop.

Lt Col Sawat Phakdee, the lead officer from the Bangkok squad, told the Gazette that his officers had been working on the case for a month.

“The pair were operating as part of a larger drug network that we are still investigating. We have yet to get the ‘big guy’, but we are continuing our investigation,” he said.

Col Sawat described the drug syndicate under investigation as large. “It moves many, many millions of baht – I cannot estimate how much drugs this network shifts.” he told the Gazette.

“There is a definite Phuket-Bangkok connection. From the information we are getting here in Bangkok, the drug situation in Phuket is getting so bad – it’s scary,” he added.

Mr Kittisak and Mr Dusit are now being detained in Bangkok.

“The two suspects confessed that they were only to receive the parcels [containing the drugs] and were to only hold onto them before someone else came to pick them up. They are now being held in Bangkok,” said Lt Col Prawit Engchuan of Phuket City Police.