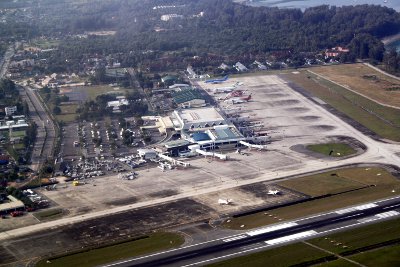 PHUKET: The 5.7-billion-baht expansion of Phuket International Airport is likely to begin next year, and take two and half years to complete, the Senate Standing Committee on Transportation was told this week.

The Standing Committee, led by Committee Chairman Kecha Saksomboon, heard the news at a high-profile meeting at Phuket Airport on Wednesday.

“On August 23, the relevant authorities will consider and decide which construction company will be selected. I believe the project will start next year. The terms of the tender stipulate that construction take no longer than 31 months,” he added.

In light of the impending major construction work, Mr Pratheep explained that all commercial business contracts and concessions to operate taxi and rental car areas at the airport will be extended for only another six months.

Phuket Airport Director Pratuang Sornkham told the meeting, attended by Phuket Senator Thanyarat Achariyachai and Ministry of Transport Inspector-General Sumpun Pongthai, as well as officers from other relevant departments, that more seats had already been installed in the departure lounges and the rest rooms have been renovated.

“We expect nine million people to use the airport this year,” he said.

Once completed, the expansion project is expected to boost passenger capacity at Phuket Airport to 12 million travellers a year.

However, Committee Chairman Kecha said the main purpose of the senatorial visit was to hear the complaint against the airport administration for considering allowing 30 more metered taxis to serve passengers at the airport.

“Under the current concession we have, we now pay the AOT 1.5 million baht a month. This is a very high price,” Mr Prakorp said.

Phuket Land Transport Office (PLTO) chief Teerayut Prasertpol explained that his office was willing to allow the 30 new metered taxis. The PLTO’s permission is required as the total number operating in the province is regulated.

However, Mr Teerayut said that so far none of the 30 new metered taxis had been registered with his office as commercial vehicles.

The complaint by PCS follows the Phuket Taxi Meter (PTM) Service Co Ltd filing an official request on June 6 to add 30 cars to their fleet of 80 metered taxis at the airport.

The move to boost the taxi fleet came as part of the company’s negotiations to renew its concession. PTM’s current concession is set to expire on September 30.

The Senate Standing Committee acknowledged that it understood the complaint, but did not comment on any remedial action to be taken.

* Airports of Thailand (AoT) is the public company nominated by the Ministry of Transport to operate several of Thailand’s busiest airports, including Phuket International Airport.