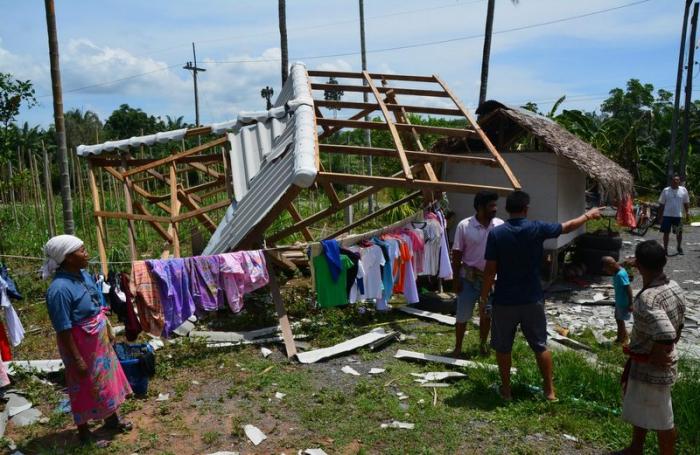 KRABI – PHANG NGA: High winds, rain and hailstones caused extensive damage to property in Krabi and Phang Nga on Thursday, marking the onset of the monsoon season. One official said it was the worst storm in almost 40 years.

“At least two houses were completely destroyed and 20 others were extensively damaged in Krabi, as well as crops, including 1,500 sugarcane plants and 20 rubber trees,” said Banhan Bonyasia, Deputy President of the NaNue Administration Organization [OrBorTor].

The cost of the storm damage was estimated to be several hundred thousand baht. Authorities are compensating residents whose houses were damaged. They also provided temporary housing for the two families whose houses were completely destroyed.

In Phang Nga, 10 buildings were damaged during the two-hour onslaught of hail and rain at the Phang Nga Agriculture and Technology College in Takuatung.

“The storm damaged the school’s electrical system and knocked down several trees on campus, some of which have been there for more than 30 years, ever since the school was established in 1978,” said the deputy director of the college, Chaipan Kachakanpayan.

“This is the most extreme storm we have had in 38 years, but luckily, no one was injured. Some areas even experienced hail for the first time ever,” he said.

Alex Face unfazed by the controversy surrounding his painting