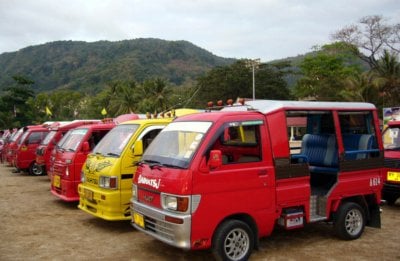 PATONG: About 40 angry tuk-tuk drivers parked their vehicles on the football field on the beach road from 5 pm until 10 pm on Sunday to protest the town’s new one-way road system, which went into effect on a three-month trial from January 16.

Among the drivers’ complaints are that the new system has increased traffic, travel time and operating costs – while decreasing profits of many local businesses that have lost passing trade.

At a meeting chaired by Phuket Vice-Governor Tri Augkaradacha yesterday morning, it was agreed to review the new road system after just 45 days, instead of 90 days as originally planned.

Tuk-tuk driver representative Madlee Sawangpol said that the one-way system makes people drive too fast, increasing the likelihood of accidents and making it more difficult for drivers to pick up fares.

The need for traffic to drive on the right on many connecting roads is also wrong and many drivers have had difficulty getting used to it, he said.

Public hearings held before the introduction of the new system were attended by too few people and they represented only certain groups, he added.

Kathu Police Deputy Superintendent Pol Lt Col Chartchai Nicrodhanond, whose department worked together with Patong Municipality in introducing the one-way system, told the Gazette that K. Madlee attended a public hearing on the matter at Kathu Police Station on November 10 and had agreed to the proposed changes at the time.

He denied that the one-way situation has worsened traffic, except on the first day when drivers were still getting used to it.

The one-way system was now a law that all drivers must obey, he added.

Patong Mayor Pian Keesin and V/Gov Tri both said the tuk-tuk drivers were too quick to stage a protest, as the trial period was still only a week old.

However, a 56-year-old tuk-tuk driver who works the beach road told the Gazette that he didn’t want to pass along his increased operating costs to tourists. “I don’t want to raise fares [for a short journey] from 100 baht to 150 baht. This new one-way system is bad, both for tourists and for us. The police should take our concerns into account, as most of us live from hand-to-mouth,” he said.

The new system will have a trickle down effect on other businesses, he said.

“Tourists will no longer want to come into central Patong for dinner. Who wants to pay 400 baht in taxi fare to enjoy a 100-baht meal,” he asked.

Phuket Governor Niran Kalayanamit told the Gazette that the protestors represented just a small group whose interests had been effected by the change. “It’s not as easy for tuk-tuk drivers and motorcycle taxi drivers now because they can’t just stop or turn wherever they want under the new rules,” he said.

Gov Niran added, “This is a great idea that was originally proposed years ago when Pongpayome Vasaputi was Governor.” He noted that three public hearings were held on the issue.

The one-way system is sure to improve traffic flow, reduce the number of accidents and facilitate evacuation in the event of a tsunami or other disaster, Gov Niran added.

Gov Niran agreed that better road markings, including painted lines and traffic cones, were needed to indicate the correct direction of flow.