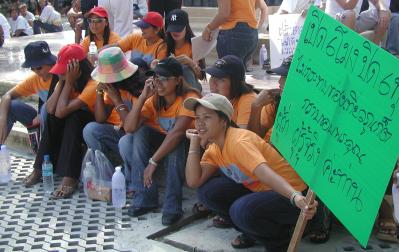 PATONG: More than 400 workers in Patong’s entertainment industry gathered on Saturday at Loma Park to vent their anger over government proposals to restrict the opening hours of entertainment venues to the period from 6 pm to midnight. The change, if approved, is likely to go into effect March 1. Patong Entertainment Business Association (PEBA) president Somphet Moosopon urged the government to take into consideration Patong’s reliance on tourist income and called for the area to be declared a special entertainment district, exempting it from the proposed early closing. “Before, when Deputy Prime Minister Purachai Piemsomboon was Interior Minister, we accepted the government’s “Social Order” policy, which brought closing times forward from 4 am to 2 am,” he pointed out. He added that Deputy PM Purachai’s approach, which consisted of enforcing laws to keep minors out of nightclubs, was more realistic than closing them at midnight to everyone. “Today, we are informing everyone about the new rule and collecting signatures on a petition outlining our grievances. We will send copies to the Phuket Governor, to the Cabinet committee behind the plan, and to the Prime Minister himself,” he said. “The recent [televised] meeting of the Cabinet demonstrated that its members never even considered the information we sent them previously. They see us only as a source of social problems, claiming we introduce minors to such vices as drugs, nudie shows and prostitution,” he said. K. Somphet added that there was still hope that the new restrictions could be avoided because Deputy PM Purachai has been given the task of reviewing the plan before its implementation. He stressed that Patong’s nightlife was developed largely by foreigners for foreigners, and had never targeted underage Thais as customers. “We just want the government to know how we feel. It’s not only bars and pubs that will be affected by this. Related businesses such as restaurants, motorcycle taxis and tuk-tuks, souvenir vendors, guesthouses and hotels will all suffer too,” he said. He added that he was trying to contact counterparts in other tourism hotspots such as Pattaya, Koh Samui, Chiang Mai and Haad Yai with the aim of exchanging information and fighting the planned changes together. Most notable among the assembled speakers was Phuket Senator Paiboon Upatising, owner of the Aloha Hotel and of the Singha Beer distributorship in Phuket. “People are confused because what Deputy Interior Minister Pracha Maleenond announced in the January 13 Cabinet meeting does not fit with Deputy PM Purachai’s previous methods, which clearly specified that earlier operating hours were not the critical factor in achieving better social order [among minors],” Sen Paiboon said. The 1,700-member PEBA hopes to collect as many signatures as possible from industry workers, tourists and anyone else opposed to the plan. The petition will be presented to Prime Minister Thaksin before the next Cabinet meeting on February 6.