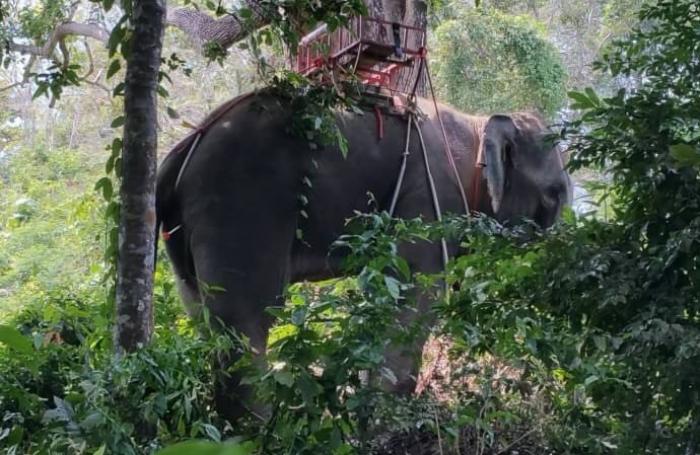 PHUKET: Police and livestock officers shot a runaway elephant with five tranquilizer darts after he panicked and ran loose at a camp in the Nakkerd Hills yesterday morning.

Staff from the elephant trekking camp located in Soi Yodsanee, Chalong, called in officers from the Phuket Livestock Office and Chalong Police for help at about 10:30am, after the elephant, named ‘Plai Kong Thong,’ panicked and ran off into the forest.

This was the same 15-year-old elephant who became agitated during a blood test less than two weeks ago (story here). During that incident, he damaged a Toyota Vigo pick-up truck and was said to have “suddenly become aggressive”.

“Although livestock officers tried to calm him down, the elephant ran off into the forest. We quickly cordoned off the area to ensure the safety of tourists and visitors,” said Lt Col Parinya Tanthasuwan of Chalong Police.

Staff and officials think that Plai Kong Thong may have panicked because he expected to get another shot, an experience he clearly did not enjoy last time. During that incident, his keeper brought him under control with the help of an ‘elephant goad’ – or bull hook – that is controversially used to tame elephants.

“We shot him with three tranquilizer darts, but that didn’t seem to have any impact on him. He ran off deeper into the forest, so we followed him, approached a little closer, and shot him with another two,” said Col Parinya.

Once Plai Kong Thong was brought under control, officers and staff proceeded to chain him up.

“We had to do it, just to be sure he wouldn’t bolt again,” added Col Parinya.

Phuket’s snakes have no place to go