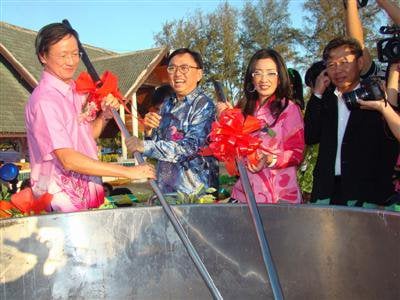 The case was automatically forwarded to the Region 8 Appeals Court, which on May 15 ordered Mr Paiboon and Mr Sawat to stop work.

Mr Paiboon told the Gazette yesterday he was completely innocent and is glad the case is now in the court system so that he can fight the charges – which was earlier not an option.

“When the EC first gave me a yellow card, I was unable to defend myself by any legal means. But the provisions of the 2007 Election Act are very good, so now I can defend myself in the Appeals Court,” he said.

Mr Paiboon said he felt sad and surprised by the allegations.

“I feel like someone sucker-punched me in the head, but I don’t know who. Now I can find out the identity of my accuser and fight back in court,” said Mr Paiboon, whose business interests in Phuket include the Phuket Villa group of residential estates and the sole distribution rights to Boon Rawd beverages, including Singha beer.

The former senator and Phuket Chamber of Commerce president continues to attend a variety of events and functions, but only in an unofficial capacity.

“I haven’t done much since I got the yellow card. PPAO Vice-President Chawalit Na Nakorn is now acting president. I think it could take them up to four months to consider the evidence and reach a verdict. I don’t know the process. I have been slandered and now I have to fight back in the court system because I know I am innocent. That’s why I don’t fear the charges. I believe Mr Sawat is also innocent,” he said.

Mr Paiboon went on to say there was no rule stopping him from entering the PPAO offices in a non-official capacity, so he continues to go in to check on how his policies and projects are going.

In a related development, Mr Paiboon revealed that Taweesak Netwong, former Patong Hospital director who was recently transferred to Phang Nga’s Takua Thung Hospital, effective from today, would be recruited to serve as director of the new PPAO Hospital in Phuket City.

Scheduled to open at the beginning of 2010, the PPAO Hospital will initially focus on care for the elderly and serve as a kidney dialysis center for the entire Andaman region, he said.

The PPAO Hospital, originally opened as the 200-bed Phyathai Hospital on Sri Sena Road in Phuket City, went out of business in 2000.

The PPAO will open contractor’s bids on systems and interior work next month, he said.